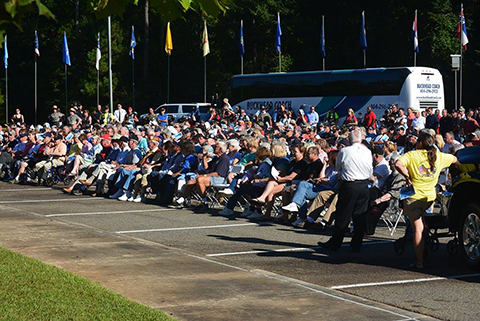 ANDERSONVILLE — Former POW Lt. Don Peppard, U.S. Navy retired, expected it would be a brief mission when he boarded the USS Pueblo for its first mission sailing out of Japan on Jan. 11, 1968, headed for the waters off the coast of North Korea. Instead, Peppard and 82 shipmates were taken prisoners of war by North Korea on Jan. 23, 1968, and endured 11 months of torture before being released.
Peppard, along with other members of the USS Pueblo crew and supporters of POWs, military veterans and those missing in action were honored at the National POW/MIA Recognition Day, an observance filled with moving and heart-rending accounts of courageous acts of bravery and tributes, at Andersonville National Historic Site Friday morning.
Charles Sellars, superintendent of the historic site, welcomed the crowd of about 600 gathered outside the National Prisoner of War Museum. The event was hosted by Andersonville NPS in partnership with the Ride Home and Friends of Andersonville.
Perhaps among the most stirring were those made by Peppard — who spoke without notes — his words captivating the large audience.
“We survived (the beatings and interrogation) by being together,” he said.
He said the Pueblo, a U.S. Navy intelligence vessel was three weeks into its mission when, on Jan. 23, 1968, after being harassed for about three days, North Korean patrol boats opened fire. The ship was in the boundary of international waters; North Korea proclaimed it was its territory. One sailor was killed in gunfire, said Peppard, the commander and another sailor injured, he said.
“We stalled for time in the effort to destroy classified information but we had no adequate way to destroy equipment and paperwork,” said Peppard. He and another officer attempted to burn as much as possible in a small trash can in his office as well as fill large bags. “We over-sided the bags; however, quite a bit of the charred papers were found on deck by the North Koreans as they boarded. We never knew how much classified information that got their hands on.
“We were blindfolded, our arms and hands tied together and we were told if we didn’t follow their orders, we would be punished,” said Peppard. The crew kept the military chain of command alive and resisted their captors. However, after months of interrogation, held captive in two different compounds and beaten, the ship’s Commander Lloyd M. Bucher was finally coerced into a confession and then with his blessing, the crew followed his lead.
Then on Dec. 23, 1968, 11 months to the day they were taken prisoner, the men were freed.
“Today we continue we are so very thankful we’re celebrating 48 years of freedom,” said Peppard. 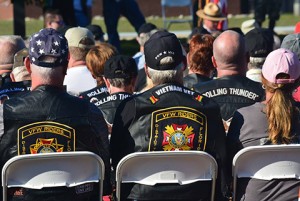 Members of Rolling Thnnder act as the official escort of the special guests each year during The Ride Home.

Other heartfelt remarks were made by Jill Hubbs of Pensacola, Fla., the daughter of Commander Donald R. Hubbs, who has been missing in action since March 17, 1968. “My father was piloting an S-2 reconnaissance aircraft, flying along the coast of North Vietnam, looking for enemy ships when the plane suddenly disappeared off the radar and all contact with them was lost.”
She related countless ways of how the family and others have searched for any sign of her father and his crew throughout the decades since, but to no avail.
“I am very proud of my father; his legacy will live on because he is honored by patriots at the Ride Home observances and because of new generations — his children and great-grandchildren — are learning how they can show respect, honor and patriotism for those who have served our nation and those who have made the ultimate sacrifice,” said Hubbs.
On behalf of the Pueblo crew, U.S. Marine Sgt. (RET) Robert J. Chicca, former POW and Bronze Star recipient, presented a handsome painting of the USS Pueblo under attack painted by maritime artist Richard DeRosset to the POW Museum. 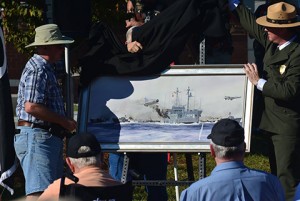 The ceremony closed with the rededication of the USS Pueblo plaque jointly made by NPS Superintendent Sellars and former POW Navy Lt. (Ret) Carl Schumacher, operations officer on the Pueblo at the time of the attack and recipient of the Silver and Bronze Stars for bravery.
The Americus Fire & Emergency Services Color Guard opened the observance that was followed by the pledge to the American flag and “The Star Spangled Banner.”

Have clowns come to town?