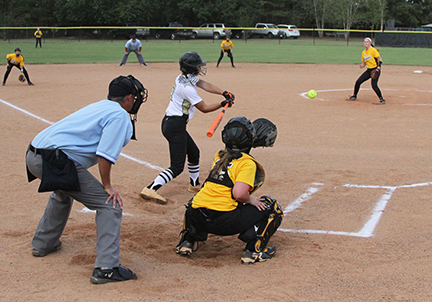 For the third year in a row, the Southland Academy Lady Raiders have earned themselves a spot in the Georgia Independent School Association (GISA) state playoffs.
With a region record of 7-2, counting the team’s region championship defeat on Sept. 27, the Lady Raiders have secured the number-two spot in GISA Region 3-AAA for 2016. The Lady Raiders completed regular-season competition with an overall record of 12-8.
As the regular season drew to a close, the Lady Raiders found themselves with the same region record as Tiftarea Academy’s Lady Panthers, with both teams entering their final match-ups undefeated in region play. The Lady Raiders vied for the number-one position in a series of contests against the Lady Panthers in a series that lasted from Sept. 19 to Sept. 22, eventually taking a pair of defeats.
Southland won the series’ first match-up on the road 9-3 in Chula on Sept. 19. Tiftarea then traveled to Americus to deal the Lady Raiders a 6-5 loss on Sept. 22 and force a tiebreaker round. The teams met again in Americus on Sept. 27 and, after a fierce battle, the Lady Raiders succumbed to a late Tiftarea Rally and suffered a 5-4 defeat.
The Lady Raiders will host the Westfield Lady Hornets on Oct. 4 for the first round of the state playoffs in Americus. Matches are scheduled to begin at 11:00 a.m. and 1:00 p.m. An “If” game will be held at 3:00 if necessary.
In Southland’s opening contest of the series against Tiftarea, the Lady Raiders scored one run in the first inning. Tiftarea answered with two runs in the bottom of the frame, one of which was unearned. 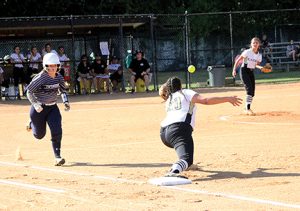 Michael Murray/Americus Times-Recorder:
Southland senior, Kaitlyn Smith, reaches out to snag the ball and dispatch a Tiftarea runner during the Lady Raiders’ Sept. 22 contest against the Lady Panthers in Americus.