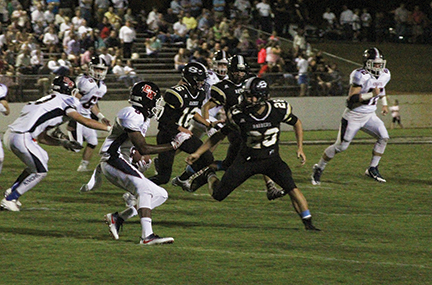 Michael Murray/Americus Times-Recorder: Logan Morris (28) and a host of other Raiders close in on a Deerfield-Windsor ball carrier during the second quarter of the Raiders’ Sept. 30 contest against the Knights in Americus.

AMERICUS – Though it’s officially been football season for over a month now, it seems that the weather finally decided to show it on Sept. 30 in Americus as the Southland Academy Raiders squared off against region foes, the Deerfield-Windsor School (DWS) Knights at Harvey Simpson Field on a crisp, fall night.
After a hard-fought battle, the Raiders dropped a 34-21 decision in the Region 3-IAAA contest, leaving the team’s conference record at 0-2 on the 2016 season. The Raiders’ overall record drops to 4-4 while DWS improves to 5-2.
The game got off to a rocky start for the Raiders after the Knights connected on a 35-yard touchdown pass, pulled in by Cooper Roberts, three and a half minutes into the action. DWS added the PAT to pull ahead 7-0 early in the match.
Southland’s Parker Weldon, Clay Owens, and Hunter McCain helped slow their foes’ drive with hard tackles, but Deerfield stubbornly continued pressing forward.
The Raiders were stalled in their return drive despite the efforts of running backs, Townsend Ray and Owens, who added rushing yards alongside quarterback, Alex Roach. Southland’s Josh Mckie punted a long ball that was picked up by a DWS back, who was subsequently stopped by McCain at the opposing three yard-line.
The Knights slowly covered the distance and expanded their advantage, with less than a minute left in the initial quarter, with a long bomb that resulted in their second six-pointer of the game. Another successful PAT left the Raiders in a 14-0 hole as the clock ticked down.
Southland wouldn’t stay in the hole for long, however, as the team utilized a pair of long passes to Saige Batten and a series of rushes by Stephen Turton, Brody Shattles, and Parker Weldon to push the ball deep into Deerfield’s red zone. From the three yard-line, Stephen Turton was able to plow his way up the gut and into the end zone. Southland’s Zane Hines split the goalposts on the point-after attempt to narrow the gap to 14-7.
Five plays into the Knights’ return drive, Owens and Shattles caused a fumble while tackling a DWS back, and Owens promptly jumped on the ball near midfield. Chandler Studdard received a pass in the ensuing drive while Weldon, Turton, and Ray added rushing yards, but the Knights’ stingy defense held on tight, holding the hosts to only six downs.
Deerfield added another touchdown on their return drive, which was slowed by hard tackles from McKie, Studdard, Logan Morris, and Ray. On fourth and three from Southland’s 20, Deerfield earned a first down by mere inches to put the team in striking distance with less than two minutes left in the half. A sack shared by McCain and Morgan Youngdale helped push the ball back on the drive, but another end zone reception to Cooper and a PAT gave the visitors a 21-7 edge going into intermission.
DWS added to their pad in their opening drive of the second half, with a Cameron McCook touchdown before Southland answered in the final quarter with a drive highlighted by completions to Luke Law and Shattles. Owens kept the crowd cheering halfway through the progress with a 46-yard run that landed the Raiders at DWS’ 17. From there, Weldon added eight yards and a pair of rushes up the middle from Turton added another six points for the Raiders. Hines, once again, added the PAT, leaving the score 27-14 with five minutes left to play.
The Knights added an insurance touchdown after a nine-play, 39-yard drive when Cooper Roberts broke the plane. Another on-point PAT left the visitors up 34-14.
The Raiders weren’t done, however, as the team utilized a series of carries by Morris to score in the final seconds of the game. Hines then nailed his third PAT of the night, leaving the final score 34-21.
Owens set the pace for the Raiders on the ground, carrying for 71 yards on seven attempts, followed by Turton, who added another 55 on the ground in 10 attempts. Morris rushed for 42 yards on four carries.
Saige Batten pulled down three of Roach’s seven completed passes to add 75 yards through the air. Chandler Studdard, Luke Law, and Shattles accounted for the remainder of the team’s receptions, with Studdard catching two.
The Raiders will look to improve on their record in Americus on Oct. 7, hosting the Valwood Valiants in another conference match-up. On Oct. 14, Southland will travel to Thomasville to take on the Brookwood Warriors for the team’s regular-season closer.