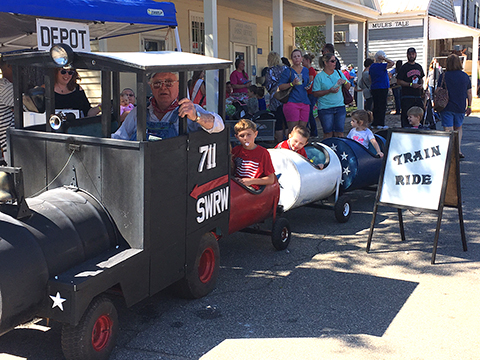 Andersonville Mayor Marvin Baugh takes children for a ride on the train he built.

ANDERSONVILLE — Between 6,000 and 7,000 visitors attended the 40th annual Andersonville Historic Fair, according to organizers. This year’s event was dedicated to the late Peggy Sheppard, one of the co-founders of the event, and longtime tourism director for the Civil War Village.
Cynthia Stormcaller said the visitors poured into the fair on both days of last weekend. 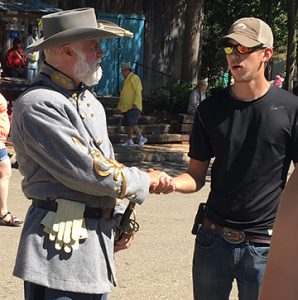 ‘General Robert E. Lee’ greets someone from the 21st century.

“There were cars everywhere,” she said. “It was a steady stream. I hadn’t seen that many cars in a long, long time.
The nice weather last weekend — cool mornings and breezy sunny days — didn’t hurt.
Grand Marshals for the parade this year were two of Andersonville’s “Outstanding Elders,” Howard Holloway (with his wife Jackie) and Lillie Mae Johnson.
Stormcaller said this was “the year of music” for fair organizers as they played host to The Georgia Southwestern State University Jazz Band, Joey Recker, Laney House, and Eddie James and the James Gang, all performing at venues around the fair. 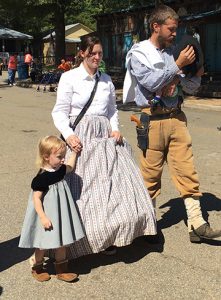 Some of the reenactors’ family members also dressed the part.

Stormcaller said the fair’s Facebook page is filled with positive comments about the fair such as “great music” and “great family fun.”
The event is held the first full weekend in October every year.