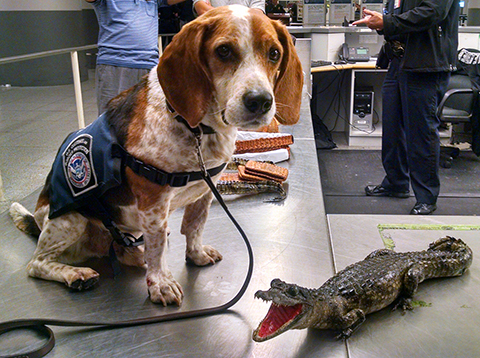 Jasper is shown with a young alligator, now stuffed, that he discovered being smuggled into the states at JFK.

JAMAICA, N.Y. — U.S. Customs and Border Protection (CBP) employees at John F. Kennedy International Airport said goodbye to CBP Agriculture K-9 Jasper, an eight-year-old beagle, who spent almost six years with CBP at JFK.
“We grew accustomed to watching Jasper enthusiastically work to prevent prohibited animal and plant products from entering into the United States,” said Robert E. Perez, director, Field Operations New York. “We are going to miss seeing him in action.”
Jasper began his service in 2011, when he was donated from the Columbia County Humane Society in Georgia. He attended the U.S. Department of Agriculture Canine Academy in Orlando, Florida. After 10 weeks of training, he was assigned to the John F. Kennedy International Airport where he has spent his entire career.
Jasper had 17,167 total seizures intercepting 23,485 prohibited plant and animal products resulting in the issuance of 78 civil penalties.
Among Jasper’s most memorable discoveries are rhinoceros skin, bear meat, whale meat, a goat’s head, live turtles, and a plant seizure that changed the regulation regarding the importation of citrus fruit from the Dominican Republic.
CBP Agriculture K-9 Specialist Amanda Tripple, Jasper’s handler, adopted him. At the end of the day, she turned in Jasper’s collar, badge, and vest, and completed transfer ownership forms.
“At the end of their shift, Amanda took Jasper around CBP’s area within the airport. Since Jasper officially became a pet, he was led around the workplace without his CBP vest and employees were allowed to pet him,” Deputy Chief (Canine) Gary Walck said. “Jasper loves interacting with people. He enthusiastically enjoyed all of the extra attention that he received on his last work day before heading into retirement. Jasper was a great detector dog and will be missed by all.”
Jasper is adjusting well to retirement with the exception of digging through the garbage and expecting a treat when he positively alerts.