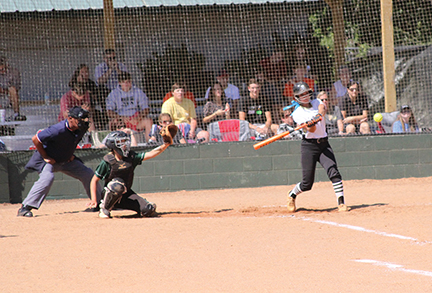 Michael Murray/Americus Times-Recorder: Southland’s Abby Dent hits a single during the first game of tthe Lady Raiders’ double-header against Westfield on Oct. 4 to drive in Haley Warren for the Lady Raiders’ only score of the match.

AMERICUS – Following the end of their impressive 2016 regular season, the Southland Academy Lady Raiders softball team earned a spot in the Georgia Independent School Association’s Class AAA state playoffs.
Southland’s girls hosted longtime rivals, the Westfield Lady Hornets in a double-header on Oct. 4 for the first round of the playoffs. Westfield brought a strong and experienced team to the Americus field and, eventually, earned the right to progress to round two of the playoffs with a pair of victories over their hosts.
Westfield went on a rampage in the initial game of the series, grabbing a 10-1 win over the Lady Raiders. The Lady Raiders continued fighting in the second matchup of the day, but only managed to hold the visitors to a four-point, 6-2 win.
With these losses, the Lady Raiders draw the curtain on their 2016 season with an overall record of 12-10. The Southland team capped off their 2016 region competition with a conference record of 7-2.
The Lady Hornets will go on to face the Heritage Lady Hawks, who earned the right to proceed in the playoffs with a pair of shutouts of Edmund Burke Academy.
Westfield got off to a strong start in Tuesday’s first contest, plating five runners in the first two innings.
The Lady Hornets brought a strong pitcher to the game, along with experienced fielders, who stubbornly kept the Lady Raiders’ runners out of scoring range throughout the first four innings. All the while, Westfield’s heavy hitters steadily found gaps in the outfield to amass a 10-0 lead by the end of the fourth inning.
In the bottom of that frame, Southland catcher, Abby Dent, finally got the ball rolling for the Lady Raiders, belting a double. Unfortunately, for Southland fans, Dent’s progress was stalled at third base.
The top of the fifth inning saw Lady Raider shortstop, Holly McCain, pull down three fly balls in a row to send the hosts back into the dugout.
Southland made its move in the bottom half of this frame when Haley Warren opened by drawing a walk. Ally Dent then reached first base, pushing Warren to second. From there, Savanna Swann dropped a perfectly-placed bunt to load the bases. Abby Dent followed with a single, driving in Warren and avoiding the shutout. 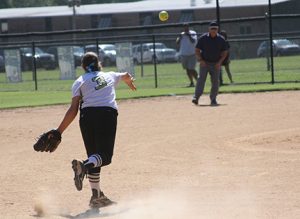 Michael Murray/Americus Times-Recorder:
Southland’s Holly McCain fires off a throw to first base to dispatch a Westfield runner during game one of the Lady Raiders’ Oct. 4 playoff double-header in Americus.

The Lady Raiders kept the visitors on their toes in the afternoon’s closer, but the Lady Hornets still managed to score three runs in the initial frame.
A strong pitching performance from Swann and a lot of determination from Southland’s defense helped prevent the Lady Hornets from plating another runner until the bottom of the fifth frame.
In the meantime, the Lady Raiders began making plays, with Sara Beth Storey and Hannah Philpott both collecting hits in the top of the third. Abby Dent and Olivia Perry opened the top of the fourth with a pair of singles before Brittany Tyler added one of her own to drive in Southland’s first run of the game. Storey then followed with another hit, plating Perry and bringing the Lady Raiders’ total to two runs.
Westfield scored a trio of insurance runs in the bottom of the fifth to eventually snag the 6-2 victory.
Lady Raider head coach, John Brady, spoke with the Times-Recorder following the series. “I’m really proud of what the team has done this season,” Brady said. “Considering the team’s youth and inexperience in some important places, I think we did really well. It was a good accomplishment for the girls to win 12 games and compete in the region championship even though we didn’t take it any further.”
“We have a great group coming back next year and we’re excited about that,” he continued. “I’d like to thank all of our supporters and our seniors (Abby Dent, Kaitlyn Smith, and Mary Martin Shealy) for all that they have done for the team.”