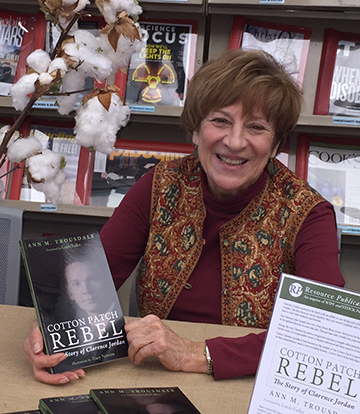 Author Ann Trousdale, with her biography of Clarence Jordan, has a book signing today in Americus.

AMERICUS — The late Clarence Jordan, who founded Koinonia and penned the Cotton Patch Gospels, is the subject of a new biography about the singular subject of a new biography just out.
From 9 -11 a.m. today, Oct. 15, author Ann M. Trousdale of Baton Rouge, Louisiana, will present her book, Cotton Patch Rebel: The Story of Clarence Jordan. At 9:30 a.m., she will talk and respond to questions. All are welcome! This free event will be held at Bittersweet at 111 W. Forsyth St., downtown Americus. Koinonia will be selling copies which the author will gladly autograph.
Cotton Patch Rebel tells the story of Clarence Jordan from his early childhood to the days of Koinonia Farm, The Cotton Patch Gospels, Habitat for Humanity and more. It took Trousdale five years of research to produce the book. She particularly wanted to make it appealing and inspiring for young folks.
As she describes her subject, “Clarence Jordan seemed to be born with an ability to see things just a little bit differently than other people did — and sometimes that got him into trouble. Like his views on racial equality: they just weren’t popular with many other white people in the Deep South of his day. Like his views on war and how to deal with violence and hatred. For Clarence, the Gospel was very clear about these issues. Moreover, he believed that Jesus’s teachings were not just abstract principles but were meant to be applied directly to everyday life. That got him into trouble too, especially among certain church-going people.
“Clarence became a progressive farmer, a sought-after preacher, a Greek scholar, an author, a precursor of the Civil Rights movement, and a family man. An inexpressible sense of humor enlivened all these aspects of his life.”
Trousdale is a retired professor at Louisiana State University where she taught courses in children’s literature and storytelling, the oral interpretation of literature and children’s spirituality, focusing particularly on using literature to support children’s spiritual lives and religious understanding. Currently, she has duties as an ordained Deacon in the United Methodist Church and also spends much of her time writing. She is visiting her friend Linda Fuller Degelmann this week in Americus, as well as Koinonia.
Trousdale was gracious in answering a couple of questions about her book via email. The Times-Recorder asked how she came to choose Jordan as her subject.
“When I was living in Lake Placid, New York, in the early 197’s, my pastor recommended to me the Cotton Patch Gospels. I thought they were witty and original, and they struck a special chord with me as I was a misplaced Southerner at the time, being from the Deep South myself. Then, more than 10 years later, when I was doing graduate studies at the University of Georgia, a friend took me to visit Jubilee Partners, an offshoot of Koinonia, in Comer. My interest in Clarence Jordan was piqued, but it was some 20 years after that that I visited Koinonia for the first time. By then I had taken a position at Louisiana State University, teaching courses in children’s literature. Dave Castle, one of the members of the community, showed the first-time visitors Faith Fuller’s documentary of Koinonia, Briars in the Cotton Patch, a very powerful and dramatic telling of the story of the community. At the end of the film, Dave said, ‘He was a great man, a pioneer of Civil Rights. But nobody will ever hear of him.’ His words cut me to the heart. I knew the power of story in children’s lives. ‘Children need to hear this story,’ I thought, and I decided that I would try to write it.”
Trousdale said that for the next eight years, she read everything she could find that was written by Clarence Jordan and about Clarence Jordan. She visited Koinonia in Sumter County a half-dozen times, sometimes stopping by and sometimes spending several days, doing research in the archives and interviewing members of the community.
— Beth Alston