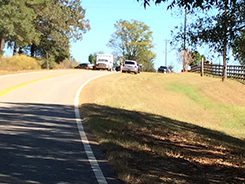 This was as close as people were allowed Saturday on Upper River Road near Marvin McNeill Road.

AMERICUS — The Georgia Bureau of Investigation (GBI), Region 3 Office, Americus continues its investigation into an officer-involved shooting in rural Sumter County.
According to the GBI’s Region 3 Special Agent in Charge, Danny Jackson, at approximately 1:48 a.m. Saturday, Oct. 22, Georgia State Patrol Trooper Alec Davis, of Post 10. Americus, attempted to conduct a traffic stop on a gray 2008 Chrysler 300 at the location of Mayo and Oglethorpe streets in Americus. The

driver of the Chrysler 300 was identified as Anthony E. Mable. As a result of the traffic stop a vehicle pursuit ensued. During the course of pursuit, according to Jackson, Mable crashed the Chrysler 300 into the marked patrol vehicle driven by the trooper several times.  The Chrysler 300 being driven by Mable came to a stop at Upper River and Marvin McNeill roads after it failed to negotiate a turn onto Marvin McNeill Road.
Jackson said Mable attempted to exit the vehicle at which time a struggle between Mable and the trooper occurred. During the struggle the trooper fired his weapon, striking Mable. Mable was airlifted to the Macon Medical Center where was treated for his injury, and was later transported back to Sumter County where he is jailed. Trooper Davis was also transported to the Phoebe Sumter Medical Center to be treated for injuries sustained during the struggle.
Mable, 40, of 107 Knollwood Drive, Americus was charged by the State Patrol with the following infractions: driving on the wrong side of the roadway, obstruction of law enforcement officer, failure to maintain lane, fleeing and attempting to elude officer, reckless driving, DUI, hit and run’/leaving the scene of an accident, driving while license is suspended or revoked, speeding, aggravated assault on a police officer, failure to stop at a stop sign, and possession of an open container.