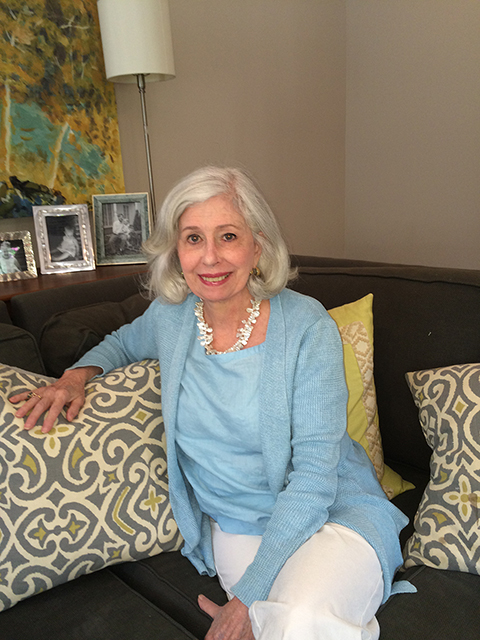 Mary Beth Rogers leads a full life today, as artist, mother and grandmother. She says he faith in God lead her through her breast cancer journey.

AMERICUS — Mary Beth Rogers was facing major challenges when she was handed another: breast cancer.
The week Rogers learned she had stage one breast cancer, her late husband, Jimmy Rogers, had major surgery – his right leg was amputated below the knee, a side effect of vascular disease. And the family was already making joyful plans for the wedding of their daughter, Rachel Rogers, to Justin Arnold that fall.
“The timing was incredible; I couldn’t believe so many things were happening in our family at the same time,” said Rogers, recalling the summer of 2007.
“We managed to get through the medical issues with a positive attitude and enjoyed planning Rachel and Justin’s upcoming wedding. We moved forward, but we couldn’t have done it without the support of our loving family, friends, the community and our strong Christian faith in God,” said Rogers.
Rogers said support is needed and welcome, but at the same time she points out the diagnosis affects others in the family, too, and you must stay strong for them. “My husband, who died four years later, needed strength to get well. I had to be strong for him and our daughter because her father was so ill. It’s very sobering for a daughter to have their mother diagnosed with breast cancer.”
Almost 10 years later Rogers reflected on that period as another of life’s challenges that she has faced and overcome.
Rogers’ first medical encounter was as a two-year-old toddler residing with her parents in Sweetwater, Tennessee. She contracted infantile paralysis, treated by doctors in nearby Knoxville and fitted with leg braces, but her parents wanted her to have more intense physical therapy. After waiting a year, she was admitted to the Roosevelt Rehabilitation Center in Warm Springs where she spent six months in treatment. The illness left her with a limp, but it has never stopped her from enjoying life.
Rogers took that childhood experience and the more recent breast cancer diagnosis and treatment in stride and never looked back.
As an adult, Rogers had annual mammograms, which for years showed calcification deposits, she said, but she was always cleared. “I hadn’t had a mammogram in more than a year when I went for a physical in the summer of 2007. Following the mammogram I had additional tests and final results showed I had two malignant tumors in my left breast that combined were more than one centimeter. I was treated for stage one breast cancer,” she explained.
In October, a month before her daughter’s wedding in November, Rogers had a double mastectomy and reconstructive surgery at the Georgia Breast Center in Marietta performed by Dr. Kristen Corgan, an expert in the field of breast cancer at the time. She has since died.
“The cancer had not spread to my lymph nodes and I was given the option to have chemotherapy. I took the drug tamoxifen for five years,” says Rogers, who continued follow-up appointments with her oncologist. After five years she was reevaluated and given the option to take another chemotherapy drug, femara, for five more years.
“I decided against taking it,” said Rogers. “I was concerned the drug would be destructive to my bone density, one of the side effects, because of my history of childhood infantile paralysis and I didn’t want to take the chance of breaking a bone.”
During a follow-up appointment with Dr. Chirag R. Jani, M.D., medical oncologist at Phoebe Sumter Medical Center in Americus and Phoebe Putney Memorial, Albany, she was told she made the right decision.
“You have to listen to your inner instincts and look after your own body, take the information you have and make your own decision,” said Rogers. “And it’s turned out fine for me. Medical and blood tests since have come back with good results.”
Rogers said, “I had some of the best medical advice from doctors, and other specialists in their field from radiologists, surgeons and oncologists. I am fortunate and blessed.”
Her advice to women is to conduct monthly self-breast examinations and have regular mammograms; make your own decisions, look after your own body and most of all have deep faith and hope.
“We’re put on earth to try to help others make the best of their life and it is our duty as a friend, mother and grandmother to help other women,” said Rogers. “I am so thankful for the strong Christian faith I have in God, which I have always had, and my deep love for my Episcopal faith.”
A talented artist and portraitist, Rogers attended Meredith College in North Carolina and graduated from the University of Georgia with the bachelor of arts in fine art as well as study abroad programs through the university. She taught art at the elementary and high school levels in the Sumter County School System and in more recent years had weekly art classes at her home studio.
A long-time Americus resident, she has a daughter and son-in-law, Rachel and Justin Arnold of Americus, and a son, Will Rogers and his wife Shannon of Atlanta. She is the proud grandmother of two granddaughters, Sloan Arnold, 4, and Charlotte Arnold, two.