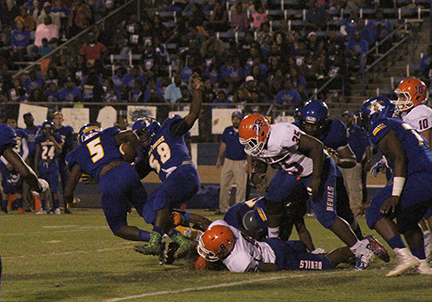 ATR File Photo: ASHS’ Kobe Lewis (5) makes a leap to gain an additional, precious yard as a Columbus High during the Panthers’ Nov. 4 contest in Americus.

It’s that time of year again… playoff season… when the Georgia High School Association (GHSA) lines up some of the top young athletes in the nation to compete for the state title.
With dozens of talented teams currently gearing up to take on opponents that they, in many cases, have not faced in years if ever, Georgia football fans are in for a treat and, likely, a few surprises over the next five weeks. The stage is ready for some quality football action and some inevitable upsets to help keep it interesting as these teams will attempt to adapt to different playing styles and make their marks on the 2016 brackets.
With their 17-14 victory over the Columbus High School Blue Devils on Nov. 4, the Americus-Sumter High School (ASHS) Panthers have earned themselves a spot in the Class AAAA state playoffs, scheduled to begin on Nov. 9.
The Panthers will be joining Region 1-AAAA opponents, Cairo, Carver, and Northside High as contenders for the state title when the ASHS crew heads to Thomson to battle the Thomson High School Bulldogs for the opportunity to move forward.
The winner of this match-up will go on to face the victor of a contest between West Hall and Troup County the following week.
By all accounts, the as-yet undefeated Bulldogs have proven repeatedly that they are a force-to-be reckoned with as they plowed their way into the top spot of Region 3-AAAA.
Recently, in the Bulldogs’ region-championship match against Burke County, Thomson running back, Mike Thomas, broke away for an explosive 235 rushing yards on 33 attempts as he paved the way for his team to grab a 20-7 victory. Thomas certainly won’t be the only threat that the Panthers will have to contend with in order to earn a spot in the second playoff round. On the defensive side of the ball, Thomson’s Christian Tutt has been making waves as he split time between the positions of cornerback and free safety. In that same match-up against Burke County, Tutt is reported to have helped put the game away with a third-down pass breakup to bring Burke’s last-stand drive to a screeching halt before taking the following punt 58 yards for a touchdown.
The Panthers will certainly have their work cut out for them in this road tilt but, luckily for local fans, the ASHS team has been steadily gaining steam under the guidance of head coach, Erik Soliday, as the season has progressed. It was readily apparent to anyone in the stands at last week’s match-up that, when the Panthers gel, they can create a powerful force and build momentum that is difficult for their opponents to stop.
With the speed and competence of starting backs, Eric Brown and Kobe Lewis (among many others), coupled with quarterback, AJ Payne’s ability to put the ball where he needs it to be, the Panthers should be able to counter whatever advances are made by their hosts of Friday. The deft hands of receivers, Daveon Johnson and Braelin Williams could also prove to give the visitors an edge if the Bulldogs find a way to stop the Panthers’ ground game.
In the other direction, the Panthers will need to see their defensive linemen deliver the type of performance that fans enjoyed last week, as the efforts Christian Mable, Michael Bridges, Mikal Douglas, and Zyrieck Allen were instrumental in solidifying ASHS’ final region win of the regular season.
Whatever the outcome of the game, one thing is certain. It will be an action-packed match-up that should keep fans on both sides of the stands on the edges of their seats.

SGTC Jets, Lady Jets come out on top in…