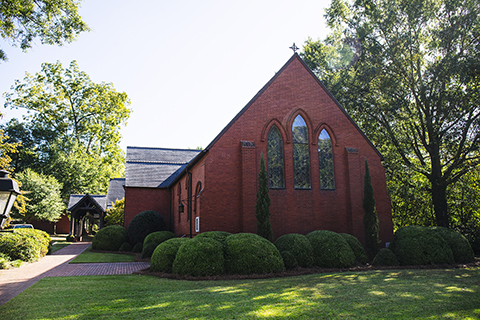 The historic Calvary Episcopal Church, designed by Ralph Cram, is located in the heart of Americus’ historic district, just north of the Lee Street Bridge.

ATLANTA — The Georgia Trust for Historic Preservation released earlier this week its 2017 list of 10 Places in Peril in the state. On the list are Calvary Episcopal Church and the Lee Street Bridge in Americus.
The state has had engineers on the ground in Americus more than once over the past few months, surveying the historic bridge and surrounding areas of the Historic District. Some local leaders want to see the bridge destroyed and replaced with another, higher bridge to accommodate higher rail loads. Others are staunchly against the plan because it could alter the street (which is actually a state route) north and south of the bridge. The Calvary Episcopal is located just north of the bridge.
“This is the Trust’s 12th annual Places in Peril list,” said Mark C. McDonald, president and CEO of the Trust. “We hope the list will continue to bring preservation solutions to Georgia’s imperiled historic resources by highlighting ten representative sites.”
Places in Peril is designed to raise awareness about Georgia’s significant historic, archaeological and cultural resources, including buildings, structures, districts, archaeological sites and cultural landscapes that are threatened by demolition, neglect, lack of maintenance, inappropriate development or insensitive public policy.
Through Places in Peril, the Trust will encourage owners and individuals, organizations and communities to employ proven preservation tools, financial resources and partnerships in order to reclaim, restore and revitalize historic properties that are in peril.
Sites on the list include, in addition to those in Americus, are Atlanta Central Library in Atlanta (Fulton County); Chivers House in Dublin (Laurens County); Marble YMCA Building in Columbus (Muscogee County); Gaines Hall, Furber Cottage, Towns House and Hamilton House in Atlanta (Fulton County); John Rountree Log House in Twin City (Emanuel County); Lyon Farmhouse in Lithonia (DeKalb County); Mimosa Hall in Roswell (Fulton County); Charles T. Walker House in Augusta (Richmond County); and Old Zebulon Elementary School building in Zebulon (Pike County).
Sites on previous years’ lists include: Hancock County Courthouse in Sparta was rebuilt after a fire destroyed much of the interior in 2014; Pasaquan, a visionary art site in Buena Vista, received a thorough restoration funded by the Kohler Foundation and is now operated by Columbus State University; the A.L Miller School in Macon is being transformed into affordable housing; the Rock House in Thomson is now owned by McDuffie County and will receive nearly $450,000 in SPLOST funding; the John Berrien House in Savannah is now home to the business office of the Queensborough National Bank & Trust; and Capricorn Recording Studio in Macon was acquired by Mercer University to become a local music incubator. Updates on these sites and others can be found at www.georgiatrust.org.
Founded in 1973, the Georgia Trust for Historic Preservation works for the preservation and revitalization of Georgia’s diverse historic resources and advocates their appreciation, protection and use. As one of the country’s leading statewide, nonprofit preservation organizations, the Trust generates community revitalization by finding buyers for endangered properties acquired by its Revolving Fund and raises awareness of other endangered historic resources through an annual listing of Georgia’s “Places in Peril.” The Trust offers a variety of educational programs for adults and children, provides technical assistance to property owners and historic communities, advocates for funding, tax incentives and other laws aiding preservation efforts, and manages two house museums in Atlanta (Rhodes Hall) and Macon (Hay House).