AMERICUS – On Nov. 12, around 80 young cheerleaders headed to Sumter County Middle School to participate in the Sumter County Parks and Recreation Department’s annual cheer competition. Participants wowed the crowd with group routines, as well as stunts and jump competitions. Participants ranged in age from 5-12 years old.
One of the team coaches, Channin Thorn, spoke with the Times-Recorder following the event. “The girls did great, considering that, practices didn’t go as I had planned the week coming up before the competition… I was very concerned going into the competition. Thing were off balance. It seemed like everything that could go wrong did.”
“We had an equipment malfunction during the competition,” she continued. “But, even after that, the girls really stuck it out and surprised me.”

Thorn’s team went on to take first place in the five through eight year-old division at the competition. 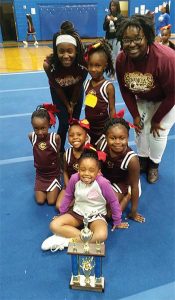 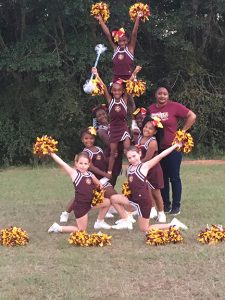