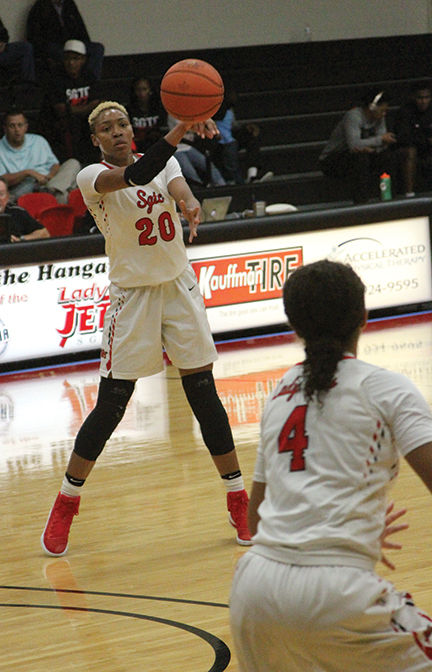 MICHAEL MURRAY I ATR: SGTC’s Desiree Corbin fires off a pass to Camille Coleman during the SGTC Thanksgiving Classic in Americus.

AMERICUS – The South Georgia Technical College Lady Jets suffered their first loss of the 2016-17 season when they fell to a very aggressive Pensacola State team in the final round of the SGTC Thanksgiving Classic recently. The Lady Jets were able to pull within one point in the final minutes of the game, but couldn’t close the gap and lost 62-56.
The Lady Jets went on to host Santa Fe Community College on Nov. 30, earning a 73-55 victory in their third contest in less than a week.
The Lady Jets are now 9-1 on the season.
“I thought our intensity was pretty good, but against a really good team like Pensacola that plays with great energy, you have to match theirs,” said SGTC Athletic Director and Lady Jets head coach, James Frey. “We turned the ball over 26 times and they scored 26 points off of our turnovers. It’s tough to beat bad teams that way and impossible to beat good teams. Hopefully, we will learn from this and improve the way we practice and prepare. I have a lot of faith in this team. We will get where we want to be.”
The Lady Jets and Pensacola State were tied at 11-11 at the end of the first quarter, but Pensacola State outscored the Lady Jets by 10 points in the second quarter to pull ahead 33-23 at the half. South Georgia Tech rallied in the third period and outscored Pensacola 17-12 and pulled within five points at the end of the third quarter.
SGTC continued to chip away at the deficit and were within one point in the final minutes of the game. From there, a series of free throw opportunities allowed the Pensacola State Lady Pirates to capture the 62-56 victory.
Only two Lady Jets, returning sophomore guard La’Deja James, and sophomore transfer, Desiree Corbin were in double-figures. James scored 13 points and Corbin narrowly missed a double double with 10 points and nine rebounds. Freshman, Esther Adenike, a forward from Nigeria, added nine points and eight rebounds while Camille Coleman, a sophomore transfer, also contributed nine points. Houlfat Mahouchiza, a freshman forward from France, pulled down 11 rebounds but only scored five points.
In the other Sunday game in the Thanksgiving Classic, Motlow defeated Central Georgia Tech, 56-47.
Details of the Lady Jets’ Nov. 30 victory over Santa Fe Community College were not available at press time.
The Jets and the Lady Jets will play at home on Dec. 3 against Southern Union Community College.  The women will play at 1:00 p.m. and the Jets will follow at 3:00 p.m.