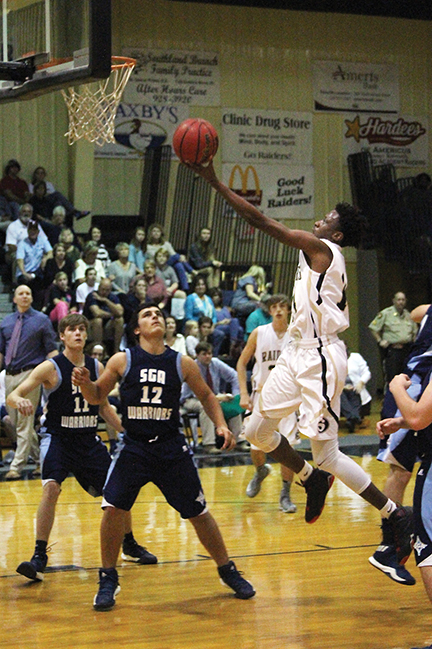 MICHAEL MURRAY I ATR: Southland’s Saige Batten goes airborn for a lay-up during the first half of the Raiders’ Nov. 29 tilt against the Southwest Georgia Academy Warriors.

AMERICUS – The Southland Academy Raiders’ and Lady Raiders’ basketball teams tipped off their 2016 home competitions in style on Nov. 29, with both teams blazing past Southwest Georgia Academy (SGA) in Americus.
The Lady Raiders opened the action for their season curtain-raiser, earning a 38-24 victory over their guests.
The Raiders then continued the carnage, taking off for a 55-27 victory over the Warriors.
With the wins, the Raiders jump to 2-0 on the young season while the Lady Raiders hold steady at 2-1.
Southland’s girls got off to a strong start in the contest when Savanna Banks nailed a free throw and Kathleen Kinslow followed with a jumper from the wing to give the hosts a 3-2 lead. Macy Williams followed with a lay-up assisted by Sydney Hayes to expand the lead to three points before the Lady Warriors tied the score 5-5 halfway through the initial frame.
Thirty seconds later, SGA took a slight lead with a free throw, but the Lady Raiders quickly negated the threat when Holly McCain tossed in a jumper from the key.
From there, the Lady Raiders carefully guarded their lead through the remainder of the first half. A second-quarter surge brought the visitors within two, at 16-14 with two minutes left before intermission, but Southland’s Cassi Bass deftly drained a three-pointer to widen the gap to five points.
Southland led 12-8 after the initial frame and clung to a 21-14 lead at the half.
The Lady Raiders continued the onslaught after returning from the break, pulling ahead 29-19 by the conclusion of the third period. Southland enjoyed their largest lead of the game late in the fourth quarter when Calyn Fort laid up a two-pointer, assisted by Williams and Sydney Payne followed with another lay-up to widen the home team’s advantage to 38-21.
At the final buzzer, the Lady Raiders found themselves on the high end of a 38-24 decision.
Kinslow set the pace for the Lady Raiders in the contest, contributing seven points and two assists, followed closely by Williams with six points and one assist. Banks and Bass each contributed five points to the win.
Nearly every member of the team’s roster saw time on the court during the match-up. 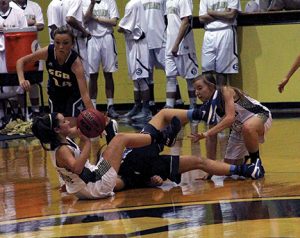 MICHAEL MURRAY I ATR:
Southland’s Kathleen Kinslow (left) scuffles with an SGA opponent for possession as Cassi Bass (right) prepares to snag the loose ball during the Lady Raiders’ Nov. 29 contest against SGA in Americus.

From there, it was the Raiders’ turn to light up the hardwood and they did just that.
Southland’s Parker Weldon opened the game with a steal, followed by Saige Batten with another steal that he followed with a jumper to open the scoring. Moments later, Batten added another fast break lay-up before Harrison Bell got in on the action, tipping in an in-and-out shot.
With six points already on the board for the Raiders, SGA finally broke their silence with a free throw. Alex Roach then got in on the action as well, laying up an assist from Batten before immediately tossing up a three-pointer. Weldon followed with another steal and made a fast break for a lay-up as Chandler Studdard was preparing to cap off the first quarter with a free throw and back-to-back three-pointers.
The Raiders took a 20-2 edge into the second stanza as the home crowd roared their approval.
The Raiders continued pull ahead over the next 24 minutes of play, taking a 33-11 lead into the second half, a 49-20 lead into the final quarter and, eventually, the 55-25 victory.
Batten set the bar high for the team, as the only player in double figures with 15 points, four rebounds, one assist, one block, and one steal. Adam Smith added nine points and one steal late in the game, followed by Studdard, who added seven points, one block, and one steal. Bell tossed in six points and brought down four rebounds while Hunter McCain added another four rebounds.
Each member of the Raiders’ roster saw playing time in each half.
Southland’s teams returned to action on Dec. 2, traveling to Cordele to battle the Crisp Academy Wildcats and Lady Wildcats. The results of these contests were not available at press time.
They will return to their home court on Dec. 6 to host the Terrell Academy Eagles and Lady Eagles.