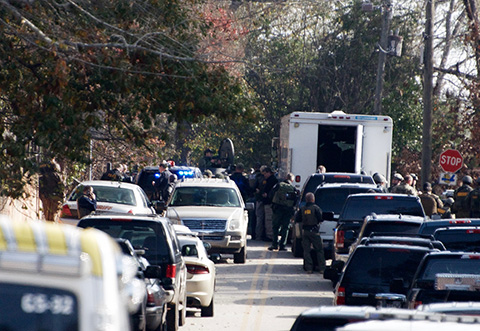 AMERICUS — At a 1 p.m. news conference today, the GBI announced the latest information relative to the intensive manhunt for the suspect in the shooting of two police officers here on Wednesday near the Georgia Southwestern State University (GSW) campus. Americus Police Officer Nicholas R. Smarr, 25, died of gunshot wounds Wednesday and GSW Campus Police Officer Jody Smith was airlifted to a Macon trauma center where he underwent surgery and remains in critical condition. Both officers received gunshot wounds to the head.

Americus Police Chief Mark Scott said that at 10:02 a.m. Thursday, a call was received from a citizen who said the suspect was located in a house in the 300 block of Allen Street. A perimeter was set up and what sounded like a gunshot was heard. SWAT teams arrived and cordoned off the area. Hostage negotiators tried for an hour to make contact with the suspect but couldn’t, and left a robot to open the door. They made entry and found the suspect, Minguell K. Lembrick, 32, dead from a self-inflicted gunshot wound. The body will be autopsied as the investigation continues by the GBI.

Charles Patterson, interim president of GSW, said he had been in Macon Thursday morning with the family of GSW Police Officer Smith and their thoughts and prayers remain for the family and the campus.

GBI Director, Vernan Keenan, who has been in Americus since Wednesday morning,  expressed great appreciation for the community and law enforcement agencies in this area who worked together to bring this case to closure. He said there were 12 law enforcement agencies, from cities and counties, that contributed to the reward fund, which reached $70,000, which led to the location of the suspect.

“This was a very dangerous individual,” Keenan said of Lembrick. “He was a convicted felon and he had a criminal record of 32 pages.” He expressed appreciation for the community that came together and provided information that led to the suspect. “The outcome has been that no other member of this community has been injured by Mr. Lembrick.” He said the law enforcement agency and the men and women of this community can now move forward while remembering the one officer killed in action and the other fighting for his life. “But the perpetrator of these heinous crimes against law enforcement is not here,” he concluded.

Chief Scott called the outpouring of support from the community, surrounding areas, and statewide  “unbelievable.” Local restaurants, the Salvation Army, American Red Cross, Sumter County EMA, and others brought food and water to the Griffin Bell Golf & Conference Center for the past two days. for law enforcement working around the clock in the manhunt. The center is being used as the command center during the investigation. South Georgia Technical College (SGTC) cancelled its annual Christmas buffet and was donating the foods already prepared to the law enforcement people and the victims’ families, according to Su Ann Bird, speaking for SGTC. Chief Scott also expressed appreciation for the outpouring of prayers for the agency and the victims and all the families involved.

Sumter County Sheriff’s Chief Deputy, Col. Eric Bryant was asked to comment on the call Thursday morning which led authorities to the suspect’s location. He said a citizen called and asked to be contacted by Bryant. Bryant talked with the caller who said he had seen Lembrick go into the house on Allen Street in north Americus. That caller is eligible to receive the $70,000 reward, according to authorities.

Scott was asked about Lembrick’s criminal record and why he was still on the streets prior to the shootings. The police chief deferred to the GBI director.

“Looking at his criminal record, he’s a career criminal,” Keenan responded. “His criminal record speaks for itself. I don’t pass judgment on the criminal justice system; I just know that he was convicted felon and in possession of a firearm and he wreaked havoc on this community resulting in the death of an officer performing his duty and another fighting for his life.” Keenan said the criminal justice system is the best in the world. “It’s not perfect and this time it had tragic consequences.”

Scott was asked if the original domestic violence call was “legitimate.” The police chief confirmed that it was a legitimate call and that the woman involved and a child present were removed to safety. In response to other questions about Lembrick’s whereabouts between Wednesday and when he committed suicide, Scott said they do not know and the crime scene was still being worked by the GBI. He said the people seen being led away by police at the scene were occupants if neighboring houses who were being taken to safety.

Scott said no other arrests had been made at that time but, “if we determine that someone was intentionally harboring this man, they will face justice.”

GSW’s interim president, Charles Patterson was asked if Officer Jody Smith is aware of his fellow officer’s (and best friend’s) death. Patterson said he was not certain and would not comment on Smith’s medical condition.

GSW Police Chief Mike Tracy was asked to comment on Smith. He said Smith was a “fine, intelligent young man.” Scott spoke of Officer Smarr. “There have been a lot of posts on social media of support. It’s been very clear from the beginning … Nick and Jody were very close friends … since high school and attended the police academy together and graduated together. They initially worked together. Their career paths took them in different directions … and brought them both back into the same town of Americus. They were very close to each other. When Jody heard the call and knew that Nick was on his way, even though we already had Americus Police officers coming as backup … he took it upon himself to respond and back up his friend. I can’t say enough about them. They are model officers. They are heroes in my opinion. They were there together. They were there together through it. Even after the shooting, they were together, throughout the whole ordeal. My heart goes out to their families. Our job now is to support them in any way we can, to make sure that Nick is honored in the days to come and that his family’s taken care of.”

“Certainly anytime that this type of incident happens and in light of everything that occurs all over the United States … for our community, let’s stay calm. Let the officers do their job,” Wright said. “… Don’t make any rash decisions or judgments about right or wrong. We believe that everything will be done … and that justice will be done … ”

According to reports, accounts have been set up at Citizens Bank of Americus in which individuals can donate to the families of the two law enforcement officers who were injured or killed during yesterday’s events.

In addition, Americus resident, Jessica Knight will be selling memorial T-shirts at The Maze, in Americus, on Dec. 9-10 between the hours of 9-2 on Friday and 10-3 on Saturday. Shirts will be available to order during the week as well until Dec. 16. All proceeds will go to benefit the families of the officers affected by the incident. This fundraiser is being carried out by a group of local nursing students who knew Smarr, the deceased officer.