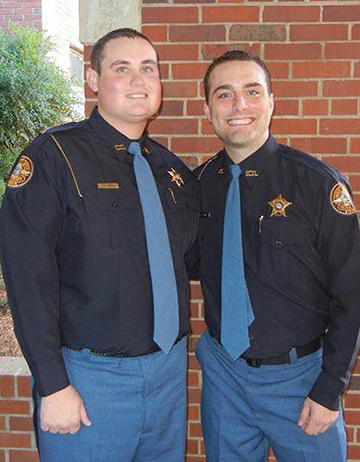 From left, are Jody C. Smith and Nicholas Smarr, the two officers who were shot in the line of duty Wednesday. Both had attended the South Georgia Technical College criminal justice program.

“On behalf of the entire South Georgia Technical College faculty, staff, and students, I would like to offer our condolences to the family and friends of Americus Police Officer Nicholas R. Smarr, and offer continued prayers for injured Georgia Southwestern State University Campus Safety Officer Jody C. Smith,” said Watford.

The two officers, who were shot in the line of duty responding to a domestic call, were graduates or students of the SGTC criminal justice program. Smarr, who died from injuries sustained in that incident, earned his associate of applied science degree in criminal justice in June of 2011. He became a certified law enforcement officer in 2012. Jody C. Smith, who is in critical condition in a Macon hospital, had attended SGTC in 2010, and had returned to finish his criminal justice degree this semester.

“This was a difficult decision,” said Watford, “but out of respect for the two law enforcement officers, their family and friends, and for the many first responders who are still involved in this active investigation, we felt that this was the appropriate thing to do. The safety of our community and our supporters is of vital importance and must take priority in this type of situation.”

Much of the food already prepared for the event will be donated and served to the members of the law enforcement community involved in this on-going investigation.

SWAT teams are now exiting the are and putting…