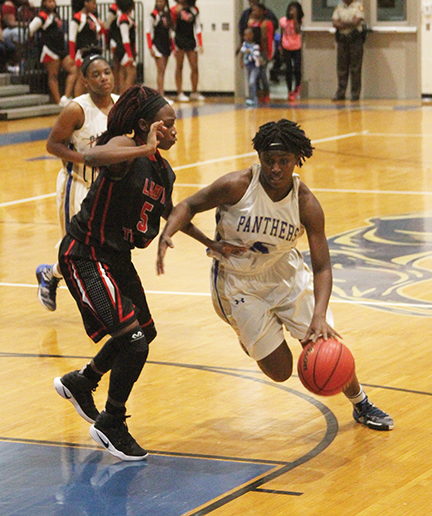 LEESBURG – The Americus-Sumter High School (ASHS) Panthers and Lady Panthers basketball teams continued their winning ways on Dec. 3 with a pair of road victories over Lee County High School (LCHS) in Leesburg.
On the heels of a defeat of their 53-29 defeat of the LCHS Lady Trojans in their regular-season opener on Nov. 19, the Lady Panthers earned a slightly narrower 64-48 win on their opponents’ home turf.
The Panthers followed with a 63-57 victory over the Trojans to complement their Nov. 19 defeat of the same team at the Panther Den in Americus.
The ASHS ladies outscored the Lady Trojans 12-10 in the initial frame of the afternoon’s opener before significantly expanding their advantage to 30-17 before the half-time buzzer. The onslaught continued in the third frame when ASHS added 20 points to their tally while giving up only 11. The hosts took advantage of the fourth quarter to stage a comeback attempt and outscore the Lady Panthers 20-14.
Fortunately for the visiting fans, their efforts fell short and the ASHS girls cinched the 16-point victory. 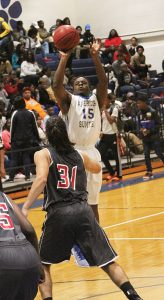 MICHAEL MURRAY I ATR:
ASHS’ Stephon Luster launchhes a three-pointer over a Lee County defender during the team’s season opener in Americus.

The Panthers then hit the court for a tight match-up, getting off to a strong start and continuing their momentum through the first half to take a 30-22 advantage into the locker room at half-time.
Early in the third quarter, the Panthers added four points to take their largest lead of the game at 34-22 before the Trojans began to fight their way back into the running.
The teams continued the fierce competition over the next several minutes and ended the third quarter with the Trojans down 43-40.
The score remained tight in the final quarter, with the hosts coming within one point three times before tying the score 49-49 in the middle of the fourth quarter. Moments later, the score sat tied once more (51-51) before the visitors began to pull ahead for good, eventually cinching the 63-57 win.
The Panthers and Lady Panthers traveled to Columbus on Dec. 6 to open Region 1-AAAA competition against the Columbus High School Blue Devils and Lady Blue Devils. The results of these contests were not available at press time.
The ASHS teams will continue non-region action on Dec. 9 at the Panther Den in Americus, hosting Crisp County. During the home match-up, a banner will be raised in the Panther Den to commemorate the Lady Panthers’ 2016 State Championship victory.