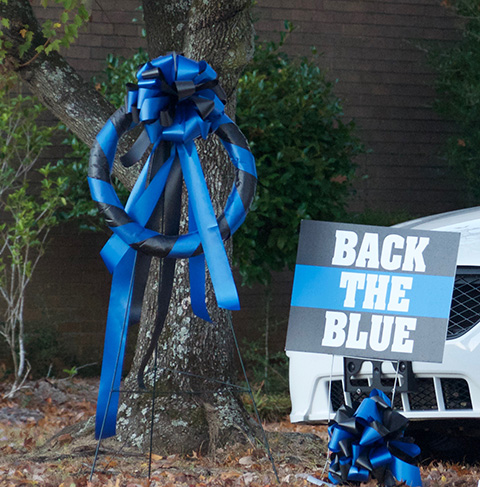 A blue wreath has been placed outside the Russell Thomas Jr. Public Safety Building in downtown Americus in memory of the two local police officers who were killed earlier this week in the line of duty.

AMERICUS — As the community continues to mourn the loss of two young law enforcement officers, a funeral has been planned for one.
Services for Americus Police Officer Nicholas R. Smarr, 25, will be held at 2 p.m. Sunday at the Storm Dome on the Georgia Southwestern State University (GSW) Campus. Greg Hancock Funeral Chapel of Americus is in charge of arrangements (see page A2). Arrangements for GSW Police Officer Jody Smith, 25, were incomplete as of press time. The same funeral home is in charge of those arrangements.
Smarr, and his best friend, Jody Smith, both responded to a domestic violence call to Country Club Apartments, in south Americus, at 9:40 a.m. Wednesday. There were active arrest warrants for Minguell K. Lembrick, 32, of Americus, stemming from an incident earlier in the week. When officers arrived to the domestic call, they recognized Lembrick and gunfire was exchanged.
The Times-Recorder, in a public records request, received a copy of the lengthy E911 call. The contents reveal a terrified young woman asking for help and trying to shelter in her apartment with her young daughter. The call, which lasted almost 10 minutes, continued as the woman told the dispatcher, who stayed on the line with her, that the suspect had shot the police officers. “I feel like it was my fault,” she sobbed. The dispatcher assured her that it was not her fault. She said she was afraid he (Lembrick) would kill someone. Law enforcement ultimately removed the woman and her child to a safe place while a massive manhunt began for the suspect, Lembrick.
Social media immediately lit up as news of the shootings spread. Both officers were taken to Phoebe Sumter Medical Center where Smarr died of his injuries. Smith, airlifted to a Macon trauma center, underwent surgery for his head wound, and died late Thursday afternoon. In one posting, from Smarr’s uncle, he said his nephew was administering CPR to his friend and roommate, Smith, when Smarr was shot. The uncle said Smarr died at the scene, although that has not been confirmed by authorities.
Lembrick posted a brief video on Facebook between 10 and 10:30 a.m., saying good-bye and later posting that he would not go to jail. That post was removed from Facebook later Wednesday afternoon.
The investigation, led by the Georgia Bureau of Investigation, and manhunt, joined by two Georgia State Patrol helicopters and law enforcement agencies from around south and central Georgia, continued into the night and into Thursday morning. A $70,000 reward, offered by several area agencies and the GBI and FBI, garnered information from a local citizen which led SWAT teams to a house on Allen Street where Lembrick was said to be. After attempting to make contact with Lembrick for about an hour, and evacuating people from surrounding residences, tactical teams sent a robot into the house, and following it, they discovered Lembrick dead of a self-inflicted gunshot wound.
Lembrick was no stranger to authorities. GBI Director, Vernan Keenan, referred to Lembrick as a convicted felon and “a career criminal” with a 32-page criminal record.
In a news conference Thursday afternoon, the Rev. Mathis Wright, president of the local branch of the NAACP (National Association for the Advancement of Colored People), urged calmness in the community with the hope that “justice will be done.”