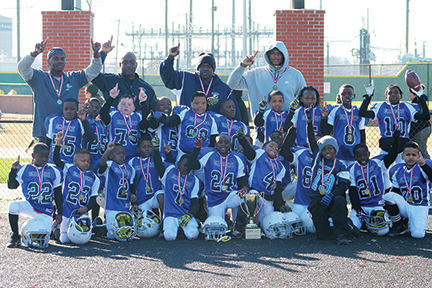 SUBMITTED BY SUMTER COUNTY PARKS AND RECREATION: The SCPRD’s eight-and-under football team holds tp the “number-one” sign in a photo with the state championship trophy following their 35-0 defeat of Calhoun that earned the team the Georgia title on Dec. 10.

CALHOUN – The Sumter County Parks and Recreation Department’s (SCPRD) seven and eight-year-old All-Star football team brought an exciting 2016 season to a close on Dec. 10, traveling to Gordon County to battle the Calhoun Parks and Recreation Department’s gridiron team for the state championship title. The SCPRD’s Panthers won the contest 35-0 to earn the state crown.
In the matches leading up to the championship game, the SCPRD Panthers defeated Crisp County (26-0), Thomasville YMCA (46-0), Lee County (49-0), Jones County (36-6), and Glenn County (20-0). In the final weeks of their season, the SCPRD Panthers gave up only one lonely touchdown to the Jones County squad.
SCPRD athletic director, Dwight Harris, recently sat down with the Times-Recorder to discuss the team’s impressive season.
“We started off out there with the Miller Rush Bowl,” Harris said, discussing the local tournament named in honor of 40-year SCPRD employee, Miller Rush. “This All-Star team played a total of nine games. Out of the nine games, they were only scored on once. That was in a district game… All of the kids played an excellent game. All of them did well.”
Each player on the team participated in the SCPRD’s regular gridiron season before being chosen to continue as a member of the All-Star team by the coaches and their teammates.
The 22-player All-Star team is helmed by head coach, Brandon Gooden, with the help of assistant coaches, Morgan Starling, Joseph Jordan, and Larry Woodham.
Harris went on to talk about the future of the team, saying, “Some of these players will be in the nine and 10-year-old group next year… Hopefully, we can keep these kids together. It’s going to take all of us to try to keep the group together… so that, hopefully, in time, they can compete for a state championship at the High School level…”
“Those guys that won the state championship were well-disciplined, well-organized, and gave 110 percent every time that they hit the field,” Harris added.
Harris went on to express his appreciation for all of the team’s sponsors and supporters, saying, “I want to thank Vincent Kearse for the role that he played, as a parent, to make this possible. He got to a bunch of sponsors to help with the trip… He was adamant about getting help… They went out on a charter bus because of what these sponsors donated. He also helped feed the kids and he really didn’t have to do that.”
Several local businesses and individuals, including Custom Performance, Rick Davis Rentals, Crook’s Paint, William Bailey-State Farm, Eazy Ride Auto Sales, Dr. Louis Riccardi, Dr. John Marshall, Heritage Barbershop, George and Lindsey Edge, Pam Sanders, Henry and Diana Roberts, Carl and Gwen Brown, and Tystanic Bus Lines sponsored the team.
Gooden, whom Harris describes as “a highly distinguished gentleman who does a great job of relating to the kids”, spoke with the Times-Recorder after the victory as well.
In a brief interview, Gooden discussed the potential that he saw in the team, saying, “I saw this team last year and I knew that, this year, they were going to be a very special team… We practiced hard at least four days each week from the end of October until the end of this past week. We went to different scrimmage games and played different teams. They got better and better every day. We never decreased our playing time and we always increased in our level of playing as we practiced.”
“Next year, it’s going to be a good group again, but most of the players from this year will be moving up to the nine and 10-year-old group,” Gooden continued. “Next year, we’ll hopefully be defending the state championship with these kids on the nine and 10-year-old team.”
Gooden has been coaching football teams for the SCPRD for eight years.