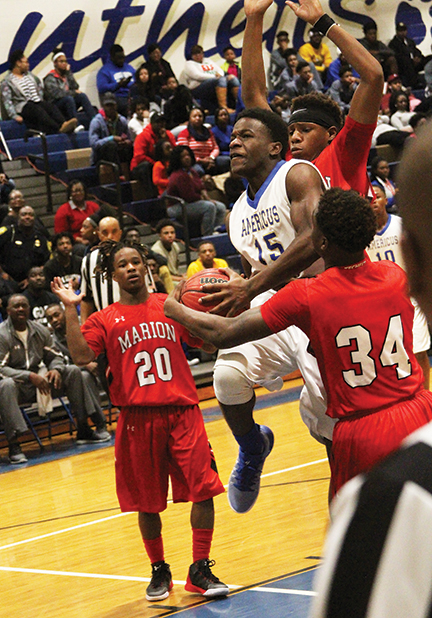 MICHAEL MURRAY I ATR: ASHS’ Stephon Luster bursts past a pair of Marion County guards on his way to the bucket during the Panthers’ Dec. 20 match-up against the Eagles in Americus.

AMERICUS – The Americus-Sumter High School (ASHS) Panthers and Lady Panthers have had a busy week, with both basketball teams kicking off the action on Dec. 17 with a trip to Cordele to take on the Crisp County Cougars and Lady Cougars before returning home for the Phoebe Sumter Medical Center Shootout tournament on Dec. 20.
The Americus ladies started off the evening on Dec. 17 with a 60-26 rout of the Lady Cougars before the Panthers hit the court for an up-and-down battle against the Cougars. After a fierce duel, which saw several lead changes, the Cougars eventually pulled ahead for good in the fourth quarter, dealing the Panthers a 66-60 blow; marking ASHS’ first defeat of the season.
The action continued two days later, with ASHS hosting the Phoebe Sumter shootout at the Panther Den in Americus.
Several teams from surrounding areas, including Stewart County, Monroe, Dublin, Webster County, Lee County, and Marion County headed to ASHS campus for the three-day tournament.
On the opening day of the tourney, the Monroe Lady Tornadoes tipped it off with a 59-14 thrashing of the Stewart County Lady Knights. The Dublin Fighting Irish then hit the court to take down the Stewart County Knights 86-61.
The hosts then got in on the action, with the Lady Panthers delivering a 60-40 defeat to the Marion County Lady Eagles before the Panthers hit the hardwood to complete the day’s sweep with an 86-68 conquest of the Eagles. 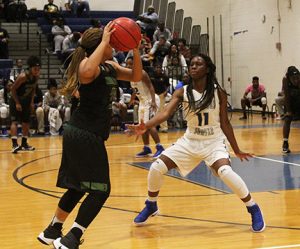 MICHAEL MURRAY I ATR:
ASHS’ De’Asia Ford prepares to go in for a steal during the Lady Panthers’ Dec. 21 tilt against the Monroe Lady Tornadoes at the Panther Den in Americus.

The Panthers were on fire in their first match-up of the tournament, shooting a whopping 70.4 percent from the floor to outscore their foes by an average of 4.5 points in each quarter.
ASHS’ Kiante Sims was a key player in the Panthers’ defeat of Marion County, hitting 13 of 14 shots from the floor to put 27 points on the board. Sims’ point total accompanied two steals and one assist. Eric Hall joined Sims in the double figures, adding another 10 points, seven assists, and three rebounds. Jurrell Jones added another eight points, followed by Sh’qual White, Joshua Moore, Eric Brown, and Karmil Hamilton, with six points each.
The following afternoon, the Panthers continued their success in the tournament, opening the day’s action with a tilt against a surprisingly scrappy Single-A team from Stewart County. After a close first half, the Panthers eventually rallied to earn a 70-44 victory.
The Knights opened the scoring with a trio of free throws before Jones landed a jumper from the lane, assisted by Stephon Luster. Stewart County added another shot from the charity stripe before Sims stuffed in a Hall-assisted dunk to even the score. Malik Jackson capped off the initial frame with a long trey and the Panthers took a narrow 7-6 lead into the second quarter.
The teams remained neck and neck in the second stanza, which was highlighted by a long three-pointer by Ellis Knighton and a Joshua Lusane-assisted lay-up by Zyriek Allen.
The Panthers returned from the half-time break with a vengeance, outscoring their neighboring foes 22-11. Hall honed in on two shots from beyond the arc to accompany Lusane’s first trey of the match. James Baker dished out a trio of assists to Jackson and Lusane in the second half as well to help propel the Panthers to a 12-point lead heading into the final quarter.
The Panthers took off on a 12-4 run in the first half of the final stanza to put the game completelu out of reach. Throughout the run, the home crowd roared their approval as Sims followed a steal with a fast break lay-up, Kobe Lewis tossed in a jumper from the key, and Lusane deftly drove the lane to add to the Panthers’ ever-growing lead.
Nearly every member of the Panthers’ roster had seen time on the court by the final buzzer, which saw the ASHS crew snag the 26-point win.
Sims set the pace for the team once again in the match-up, supplying 13 points to the win. Lusane followed closely with 12 while Hall joined them in double digits with 10, six of which came from beyond the arc. Jackson hit a pair of long three-pointers as well in the match on his way to eight points. Baker led the team in steals with three while Allen contributed two blocks to the win. Brown, Hall, and Sims each dished out two assists. 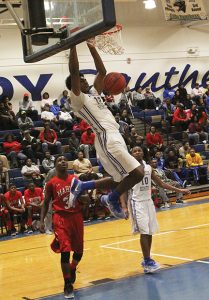 MICHAEL MURRAY I ATR:
ASHS’ Kiante Sims recovers after stuffing in a dunk in the first quarter of the Panthers’ Dec. match-up with the Marion County Eagles in Americus.

Marion County’s girls then took on Stewart County to continue the tourney before the Marion County boys took the court to dish out a 71-59 defeat to their Webster County counterparts.
Following that tilt, the Lady Panthers returned to action to deal a 61-40 defeat to the previously-undefeated Monroe Lady Tornadoes.
The Americus girls got off to a fiery start, kicking off a 6-0 run with a lay-up by Dekeyvia Blackshear, followed by a steal and a fast break lay-up by Jykiera Long. Timia Swanson and Deasia Ford each added a point from the foul line before the Lady Tornadoes made the board with a lay-up.
Monroe came within one with a three-pointer before Swanson converted a rebound and assisted Zari Mays in a lay-up to widen the gap. The Lady Panthers continued to expand the margin until the final moments when Long hit a three-pointer to close the initial frame up 20-11.
The Lady Tornadoes staged their comeback run in the second stanza, but their efforts were hindered by steals from Ford, Long, and Blackshear, coupled with a block from Mays. Despite the Lady Panthers’ defensive efforts, the visitors still managed to come within five points, 27-22, when the teams hit the locker room for intermission.
True to their form, the Lady Panthers made a resurgence in the third quarter with some strong play by Swanson, who helped propel the team to an eight-point advantage, 40-32, heading into the final frame.
The ASHS ladies turned it up to 11 in the fourth stanza, outscoring their guests 21-8 to grab the 61-40 win.
Swanson set the bar high for the Lady Panthers in the victory, contributing 19 points, six steals, and five assists to the ASHS cause.
Long followed closely with 11 points, five steals, and two assists. Mays joined her teammates in double digits, tossing in 10 points while dishing out one assist, one steal, and one block.
Shidajah Johnson added another six points, two assists, and one steal.
The Panthers then returned to the court to take down the Dublin squad 58-55.
The Monroe ladies kicked off the final day of the tournament on Dec. 22, taking on Marion County before the Dublin boys suffered an 89-49 loss at the hands of their Marion County counterparts. The Lady Panthers then took on newcomers to the tourney, Lee County, to earn their third victory of the week; a 40-39 win over the AAAAAA Lady Trojans in a tough defensive battle.
The Panthers then drew the curtain on the week’s activity with a 95-60 rout of Webster County.
Following a brief Christmas break, the Panthers and Lady Panthers will travel to Winder on Dec. 27 to test their skills against AAAAAA Apalachee High School. The ASHS teams will then make a trip to Atlanta on Dec. 28 to take on the Tift County squads at Phillips Arena before taking their places in the stands to watch the Atlanta Hawks battle the New York Knicks.