Local artist making her mark in Nashville, as well as industry 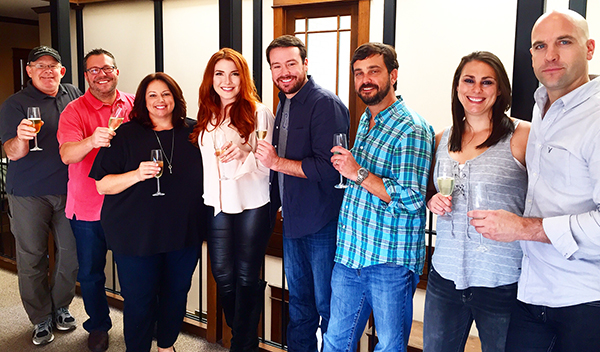 The deal signing with Hammack's new team of publishers at Universak. Hammack is fourth from left.

AMERICUS — Local musician, Caylee Hammack, is making her mark in the world of country music.
She has recently signed a publishing deal with Universal Music Publishing Group and returned from New York, where she received the ASCAP Sammy Cahn Lyricist Award.
Hammack, 22, is a 2012 graduate of Southland Academy in Americus and now lives in Nashville. She grew up in Ellaville.
It was always about music for Hammack, it seems. While the study of music was important to her, she possesses a natural talent for music.
“I always felt a fascinating pull towards music,” she said. “My mother put me into piano lessons when I was 6, and I spent years trying to learn to read music. I was simply awful. After a while of fighting it, I realized that I could play piano by ear, but not by sight. I would sit at the piano and try to pick pieces out of songs I knew. After a while, I found the freedom of creating my own melodies and lyrics to sing along to. It seems, every time I would focus on something other than music in my childhood, God would bring me right back to the songs. I have wanted this dream since I can remember; it just took a few years to realize that I wanted to do it for the rest of my life.”
Hammack is multi-talented: accomplished in vocals, piano and guitar, and writes her own melodies and lyrics.
She left home at 19 for the music mecca of Nashville.
“I had started working with Richie McDonald, the lead singer of Lonestar, and John Berry,” she said in an email interview with the Americus Times-Recorder. “They both encouraged me to move to Nashville. One random phone call from Luke Bryan ([country music icon from Lee County] later, and I decided I needed to move. God was putting people in my life that believed in me and were willing to help me reach for something I didn’t know was attainable. I had built a small but steady fan base here at home, but for what I wanted to do, the move to Nashville was imperative.”
Starting out in the city was not easy, she said.
“I stayed in a rundown motel with a chair against the door for a bit, until I could get on my feet. I played in bars downtown in Nashville just for tips,” she said. “I was very lonely in the big city without my family. It was a rough road at first, but every morning, I would wake up and tell myself that I couldn’t leave until I had made my mark on this town. It became a mantra of sorts. I forced myself to not give up, even when it was difficult. I called my parents every day before my gigs downtown and every night, I prayed that God would guide me to the path my feet were to follow. I now look back at how scared I was, and I can laugh about it. Part of that struggle made me who I am. It makes me appreciate all of the events happening now.”
While predominantly a writer of country music, Hammack is also a “pop top liner” for Universal and said she loves the collaborative effort.
“Pop top lining is an adventure every time I walk into a studio,” she said. “I get to sit down with artists and producers and listen to new pop tracks that the producer has created. Then, we write lyrics and melody over the music they bring. I love the collaboration of this style of writing because this is the moment where you get to create something truly different and original. Every one brings a strength to the room. The artist may bring her vocal style, the producer will bring the track, and I bring lyrical content, normally. I like clever, quirky lyrics that sit well over a melody. We all work together to create a pop song that our companies can pitch. I have written many songs by myself since I was a little girl, so this sets a new challenge as a writer. Any way I can challenge myself in my writing style, I jump at. I write all kinds of songs.”
Hammack is modest about her accomplishments. She was asked how it feels to be a rising young artist.
“I am very grateful,” she said. “I still put my sweatpants on, one wiggle at a time. I am the youngest signed artist/writer at Universal Publishing right now. It was very intimidating at first, but my team of publishers and fellow writers have embraced me and helped me get on my feet in the publishing world. I have enjoyed being the little fish in a big pond; there is always room to grow.”
She said her publishers have booked her schedule until March, so she is very busy.
“It’s like Christmas every day for me,” she said. “I love creating music with other writers. I like the challenge of creating constantly. There is a significant amount of time and work I have to put in, but I love my job.”
So, what’s on the horizon for a budding artist who is really starting to come into full bloom?

“I just won the Sammy Cahn Award at the ASCAP Foundation Awards at the Lincoln Center in New York and it has helped open many doors,” she said. “My team and I are writing for a cut by an outside artist, while still working on gathering songs for a new artist album. I cannot wait to get started on an album for myself.”
Hammack definitely has what it takes for success: a beautiful voice, good looks, piano and guitar acumen, and song-writing abilities, but how does come up with ideas for her songs? 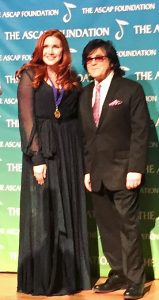 The ASCAP Award Ceremony at the Lincoln Center in Manhattan held earlier this month where Hammack received her award from John Titta, executive vice president of ASCAP Membership and a publishing legend in the music world.

“As a signed writer, we have to write about nearly everything you can imagine,” she said. “In all honesty though, I think my favorite style of writing comes from others. I am an avid people watcher. I like to find a busy coffee shop in downtown Nashville and write about the bustle of all of the different kinds of people who walk in. I like to create stories about the people that brush past me on the subway in New York, or hold the door open for me to church on Sunday mornings. Some of my music is autobiographical, but I love being able to find a random stranger on the street and imagine what exactly made them who they are. I learn more about myself by writing about others. Everyone has as story. I enjoy trying to discover them and put them on paper.”
Hammack is well on her way in Music City, USA, and it won’t be long until her fans get to hear her first album — something she is avid about. That is something that is greatly anticipated, here in South Georgia, and from fans across the nation. Caylee Hammack’s name and rep are already out there.