Southland Raiders kick off 2017 with 66-60 win over Westfield 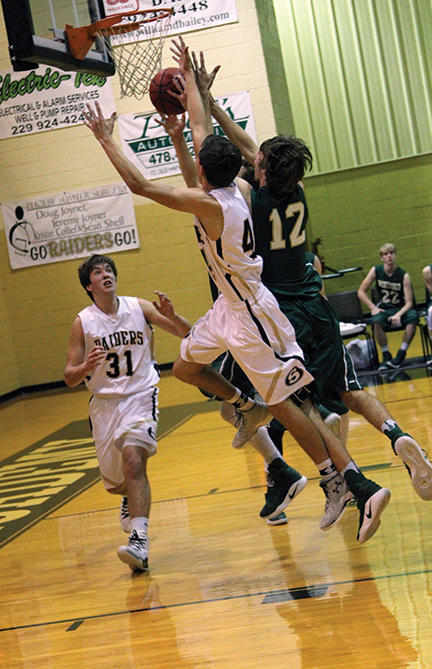 MICHAEL MURRAY I ATR: Southland’s Josh McKie (44) leaps up to snag a rebound while Harrison Bell (31) provides backup under the basket. Bell hit six three-pointers in the contest to lead the Raiders to victory over the Westfield Hornets.

AMERICUS – Southland Academy forward, Harrison Bell, was on fire on Jan. 3 at the Raiders’ home court in Americus. Throughout the duration of the Raiders’ non-region match-up against the Westfield Hornets, Bell honed in on the basket from long range six times. Bell added 18 points from beyond the three-point arc for a game-high 22 points in the Raiders’ 66-60 defeat of their visitors.
With the victory, the Raiders jump to 8-3 overall on the 2016-17 season.
Westfield scored the first goal in the contest to pull ahead early before Bell’s long-range sniping helped the Raiders run away with the score. With assists from Saige Batten and Alex Roach, Bell drained three long treys in a row to put the Raiders up 9-2 two minutes into the action.
Roach soon got in on the action, driving the lane for his first score of the match and Batten quickly followed by snagging a steal and making a fast break for a lay-up. With the Raiders up 18-13 towards the end of the frame, the Hornets stepped up their offense to add a pair of field goals and narrow the gap to 18-17 as the teams entered the second quarter.
Roach opened the second stanza with a steal, followed by Bell tossing in another long shot from downtown. Roach then showed off his long-range skills with a trey of his own. The Raiders continued to pull away from that point, gaining their largest lead of the night (37-26) off a Josh McKie lay-up halfway through the frame.
The Hornets proceeded to begin clawing their way back into contention, taking off on an 11-2 run over the final three minutes of the half to pull within two points, 39-37, as the teams headed into the locker room for intermission.
The teams continued to trade jabs when play resumed, with Parker Weldon adding his first bucket of the game just before the Hornets managed to tie the score 45-45 near the four-minute mark. The Raiders persevered, however, and took a 51-50 lead into the final quarter.
Two minutes later, the score was again tied, 52-52, before Batten added a point from the charity stripe and Westfield followed with two of their own, giving them what would turn out to be their final lead of the match. 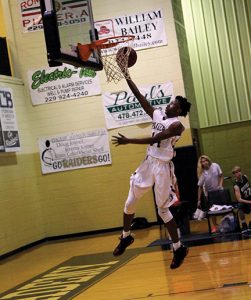 MICHAEL MURRAY I ATR:
Southland’s Saige Batten (14) takes it to the hole in the Raiders’ Jan. 3 home contest against Westfield. Batten contributed 12 points, three assists, and one block to the Raiders’ win.

Roach quickly negated the threat with a jumper from the lane and the Raiders clung tightly to their lead over the final four minutes, eventually cinching the six-point win.
Bell set the pace for the team, earning a double double in the contest with 11 rebounds, two steals, and three assists to accompany his 22 points. Roach followed closely with 21 points, four assists, and five steals. Batten joined his teammates in double digits with 12 points, three assists, one steal, and one block. McKie and Hunter McCain each added a block as well in the tilt.
The Raiders will return to their home court on Jan. 6 to continue non-region action against the Crisp Academy Wildcats. The following afternoon, the Raiders will host the Glenwood School Gators.