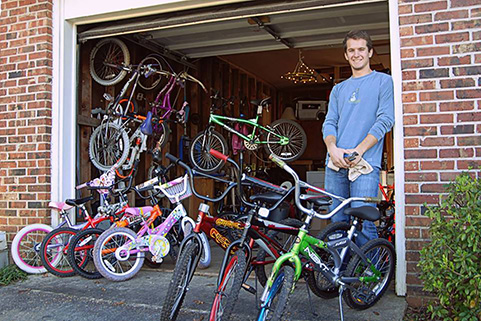 AMERICUS — Connor Ciment likes bikes. He figures kids do, too. So he makes sure that some local children get a good bicycle for Christmas.
For the second year, Ciment has been quietly working to restore bicycles that he received from a salvage yard. The 25 bikes were worn-out discards and had been left outdoors for a long time. But, Ciment made them like new again. And then gave them away.
In 2015, 15 bikes were given to children, mostly through the CASA program (Court Appointed Special Advocates). This year, another seven were readied to brighten a child’s Christmas day.
“Fixing bikes is something I really enjoy doing,” Ciment says. “There is a great gratification to bringing something back to life, especially something that can bring as much joy as a bicycle.”
To restore the bikes, Ciment relies on tools owned by the Fuller Center Bike Adventure, supplies donated by Sumter Cycling, and spare parts donated by the Bike Pedaler of Columbus.
Ciment, originally from Connecticut, completed a degree at the University of Alabama in mechanical engineering before coming to Americus as a volunteer with the Fuller Center for Housing. He serves as Bicycle Adventure coordinator, organizing three major cross-country bike rides in the summer to raise awareness and funds for the Fuller Center.
Beyond just repairing bikes, Ciment is also teaching children how to repair their own. Since CASA arranges most of the gifts, the recipients remain anonymous. But some bikes have gone to children Ciment has met.
“My favorite part has been having kids without bikes come to my garage and work on one for themselves,” he says. “They learn about how all the mechanisms work, and get the satisfaction of having fixed their own.”