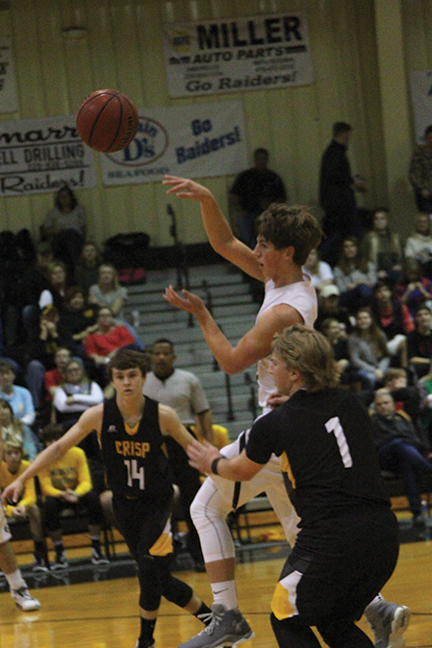 MICBAEL MURRAY I ATR: Southland’s Alex Roach launches a jumper from the key during the Raiders’ Jan. 6 match-up against Crisp Academy. Roach tossed in 14 points for the Raider cause in the win.

AMERICUS – The Southland Academy Raiders basketball team pushed their overall record to 9-4 this past weekend after splitting decisions on Jan. 6-7 on their home court in Americus. The Raiders tipped off the weekend’s action with a 51-33 thrashing of the Crisp Academy Wildcats before returning to the hardwood the following day to battle the Glenwood School Gators. The Raiders got off to a slow start in the Glenwood match-up and, despite an admirable comeback effort in the third quarter, eventually took a 43-39 defeat.
On Jan. 6, the Raiders were slow getting the ball rolling as well, as the Wildcats quickly racked up a 7-0 lead over their hosts. Southland guard, Alex Roach, promptly brought the Raiders back into the fold near the middle of the initial quarter, tossing in back-to-back three-pointers with the aid of an assist from Harrison Bell.
Saige Batten gave the Raiders their first lead of the game shortly after by driving the lane and laying a shot up to give the hosts an 8-7 advantage. Crisp followed with a lay-up of their own and a three-pointer to pull ahead by four (12-8) before, over the final three minutes of the first quarter, the Raiders utilized a pair of free throws and steals by Batten and Parker Weldon alongside Roach’s third trey of the game to tie the score 13-13 before the beginning of the second quarter.
After a scoreless opening four minutes in the second frame, the Raiders exploded into action. Weldon and Batten each logged another steal before Chandler Studdard got in on the scoring with a Roach-assisted three-pointer. Roach then tossed over another dish to Batten, who laid it up, following another ball stolen by Hunter McCain. 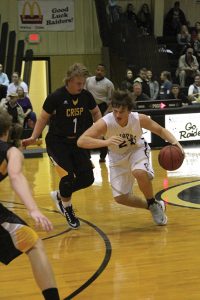 MICHAEL MURRAY I ATR:
Southland’s Parker Weldon makes a break for the bucket on Jan. 6, when the Raiders took on Crisp Academy. Weldon pulled down seven rebounds for the Raiders in the match.

Batten followed by nabbing a pair of heists and following each with a fast break lay-up to give the Raiders a 22-13 edge before the Wildcats broke their silence with a lay-up and a pair of shots from the foul line.
The Raiders capped off the second stanza when Landon Law pulled in a rebound and broke past the arc to toss in a three-pointer, leaving the Raiders ahead 25-17 as the teams hit the locker room for half-time.
The Raiders rode their wave of momentum into the second half, outscoring their opponents 15-4 in the third quarter to put the game out of comeback range. Crisp Academy added another 12 points in the final stanza to the Raiders’ 11, but was unable to get any closer to closing the gap before the buzzer sounded, signaling the Raiders’ 18-point win.
Batten set the bar high for his teammates in the victory, throwing 23 points on the scoreboard dominating the glass with eight boards. Roach added another 14 points and Weldon pulled down seven rebounds.
The following day, the Raiders hosted Glenwood to wrap up their three-game home stand.
The Gators played a tight defense in the first half, to gain a 20-8 advantage before the half-time buzzer. Southland made progress closing the gap in the third quarter, outscoring their hosts 19-10 to narrow the deficit by three points (30-27) when the final quarter commenced.
In a heated fourth frame, the Gators outscored the Raiders 13-12 to eventually cinch the four-point win.
Batten and Roach each hit double figures in this match as well, scoring 15 and 10 points, respectively. Once again, Batten led the team on the boards with eight, followed by McCain with five rebounds.
The Raiders traveled to Dawson on Jan. 10 to draw the curtain on their non-region schedule for 2016-17 with a tilt against the Terrell Academy Eagles. The results of this contest were not available at press time.
Southland’s boys will kick off Region 3-IAAA competition on Jan. 13 in Americus, hosting the Tiftarea Panthers.