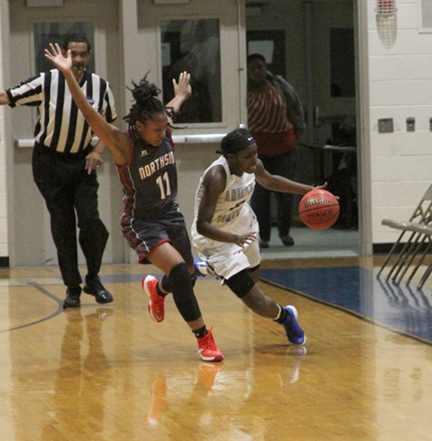 MICHAEL MURRAY I ATR: ASHS’ Timia Swanson blazes past a Northside defender on Jan. 10 in Americus. Swanson led the Lady Panthers to victory in the tilt, scoring 17 points.

AMERICUS – The Americus-Sumter High School Lady Panthers basketball team absolutely crushed Region 1-AAAA opponents, the Northside High School (NHS) Lady Patriots in the teams’ third meeting of the year on Jan. 10 at the Panther Den in Americus.
For the third time this season, the Lady Panthers earned a huge victory over the Lady Patriots, this time with a 63-31 throttling of their guests.
With the win, the Lady Panthers bump their overall record to 13-2 on the 2016-17 season, while the team’s region record improved to 3-1.
The match-up started in a more competitive manner than the previous pair of tilts, with ASHS’ Jykiera Long immediately firing off a jumper to kick off the scoring. Dekeyvia Blackshear followed with a free throw before Shidajah Johnson followed a steal with a lay-up to put the ASHS ladies ahead 5-0. 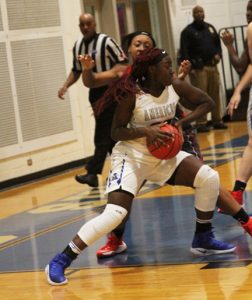 MICHAEL MURRAY I ATR:
ASHS senior, Dekeyvia Blackshear, looks for a path to the bucket on Jan. 10 at the Panther Den in Americus. Blackshear contributed six points to the ASHS vvictory.

NHS quickly countered with a three-pointer and a pair from the charity stripe to tie the score 5-5.
That would prove to be the closest the visitors would get to a comeback, however, as the Lady Panthers took off on an 11-2 run, sparked by a Tykiera Long-assisted jumper by Johnson. Amber Hicks contributed to the run with a lay-up assisted by J. Long, who soon converted her first steal of the game to a lay-up. Timia Swanson followed by tossing in a rebound.
The Lady Patriots finally broke their first-quarter silence with a jumper 30 seconds before the buzzer to narrow the gap to 16-5.
The carnage continued in the second frame, with the ASHS girls putting up 23 more points while holding the visitors to only two.
The second half of the match saw many of the Lady Panthers’ reserves come off the bench to join the action, with Quenteria Wilson, Myteshia Carson, Yolanna Tyson, and Brianna Pope each getting a chance to contribute to the victory and gain some valuable experience.
Swanson dominated the third frame, scoring eight points with assists from Hicks and Johnson as the Lady Panthers cruised to a 58-18 lead at the conclusion of the quarter.
With the help of the reserves and a pair of buckets from T. Long and Swanson, the Lady Panthers eventually staved off the visitors’ comeback efforts to earn the 28-point win.
Swanson set the bar high for the ASHS squad, putting 17 points on the board while nabbing five steals, dishing out two assists, and blocking one shot. J. Long added another 14 points, all the while assisting two teammates and grabbing one steal.
Johnson joined her teammates in double digits, adding another 10 points alongside three steals and two assists to the ASHS cause. Wilson led the team’s players from the bench, tossing in eight points. Blackshear followed with six points and one steal.
The Lady Panthers returned to the court on Jan. 13, hitting the road for Columbus to engage in a region tilt against the Carver Lady Tigers.
The ASHS girls plan to hit the court in Americus the following afternoon, hosting longtime rivals, the Westover Lady Patriots at the Panther Den in Americus.