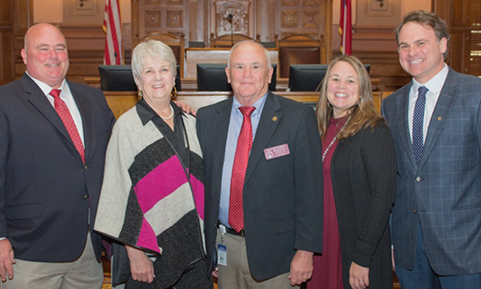 ATLANTA – State Rep. Bill McGowan, D-Americus) was sworn into office as a member of the Georgia House of Representatives on Monday, marking his first day of the 2017-2018 legislative term. Monday was the first day of the first term of the 154th Legislative Session of the Georgia General Assembly.
“It was a privilege to serve the citizens of District 138,” said McGowan. “I deeply appreciate the support of my family, who joined me as I was sworn into office, and the support and courtesy that has been shown to me by my colleagues in the House.”
In addition to being officially sworn in, the Georgia House of Representatives’ Committee on Assignments named McGowan to the Agriculture & Consumer Affairs; Budget & Fiscal Affairs Oversight; and Information & Audits committees.
“I look forward to a productive legislative session,” added McGowan. “Service to our state on committees is vital to producing good legislation for our state.
The House Committee on Assignments, chaired by House Speaker David Ralston, R-Blue Ridge, is charged with making all House committee assignments for the members of the Georgia House of Representatives.
McGowan represents the citizens of District 138, which includes Sumter, Schley, Marion, and Chattahoochee counties. He was elected into the House of Representatives in 2016, and currently serves on the Agriculture & Consumer Affairs, Budget & Fiscal Affairs Oversight, and Information & Audits committees.