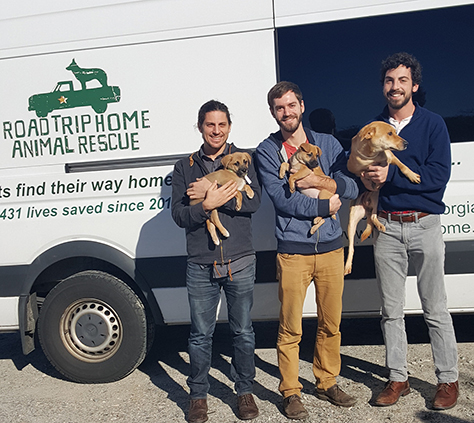 AMERICUS — The Nowhere Men, Eric Messinger, Alex Portera, and Brian Doochin, are all 20-somethings who left their corporate jobs in New York City to travel the world to capture inspirational stories of courage, determination, and heart. After spending two years traveling in over 33 countries, recent productions include a day in the life of a New York street vendor, and their Mongol Rally TV series.
The Nowhere Men began a new project at the Sumter Humane Society in mid-January by spending a day in the life of a shelter animal. Their visit is part of a documentary in production following the people involved in animal rescue and transport and answering the question: where are all the adopted rescue dogs in the northeast coming from?
The Nowhere Men’s adventure started with a road trip from NYC to Americus, Georgia.   They toured the Sumter Humane Society, met the dogs, cats, and kittens that were scheduled to leave on transport, and interviewed facility staff. The Road Trip Home Rescue, based out of the Atlanta area, was also on site, and the crew assisted in loading up the van with rescued pets, and chose a retriever named Rose and her two puppies Tulip and Violet to ride with them on the long drive from the South to the state of Maine. Short videos were shared on Facebook and their website throughout the trip to the enjoyment of thousands of fans.
Once completed, the part informative documentary and part entertaining reality TV show will examine the issues of pet overpopulation, the heroes of the animal rescue phenomenon, and highlight the awesomeness of adopting shelter pets. Scheduled to air the end of January or early February, it will be available for viewing on YouTube, Facebook, and their website www.nowheremenadventures.com.
The Sumter Humane Society is a 501(c)3 private organization dedicated to saving the lives and reducing the suffering of the abandoned, abused, and neglected dogs and cats of Americus and Sumter County. Donations are welcome and can be mailed to 108 Industrial Blvd., Americus GA 31719. Call 229-924-0268 for more information.