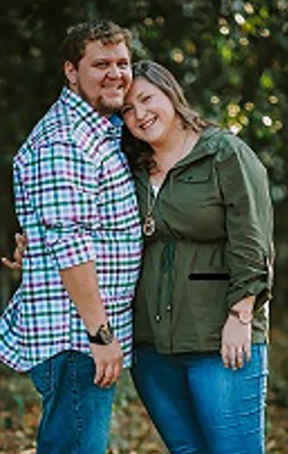 Mr. and Mrs. Walter Joe Trussell Jr. of Montezuma, Georgia, announce the engagement of their daughter, Mindi Angela Trussell, to Corey Michael Sims of Roberta, Georgia. He is the son of Mr. and Mrs. Joseph Sims of Roberta, Georgia.
The bride-elect is the granddaughter of Minnie Peavy and the late J.B. Peavy, and Mr. and Mrs. Walter Joe Trussell Sr. all of Montezuma, Georgia. She is a 2007 graduate of Southland Academy of Americus, Georgia. She graduated from Abraham Baldwin Agricultural College with an associate’s of math and science in 2010. She also graduated from Moultrie Technical College with a degree in radiologic technologies in 2013. She is employed as a radiologic technologist at Houston Healthcare in Warner Robins, Georgia.
The future groom is the grandson of the late Richard Sims of Macon, Georgia, and the late Delorna Osborne of Fort Valley, Georgia, and Mr. and Mrs. Marvin Mathis of Macon, Georgia. He is a 2007 graduate of Crawford County High School. He graduated from Middle Georgia Technical College with a degree in aircraft structural technology in 2010. He is currently employed by Plane Techs and works at Bombardier in Macon, Georgia.
The wedding will be held at 5 p.m. on March 11, 2017, at. The ceremony at The Retreat of Southern Bridle Farms in Perry, Georgia. A reception will follow.