2016 a positive year for tourism for Sumter 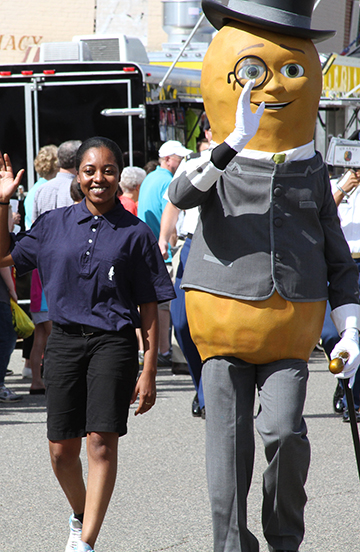 'Mister Peanut' is always a big hit at the annual Plains Peanut Festival in September, which draws a lot of visitors to Sumter County.

AMERICUS — More than 285,000 visitors toured Sumter County during 2016, the fifth time in the past six years that visitation has exceeded 250,000, according to statistics from the Americus-Sumter County Tourism Council.
The same as in 2015, October drew the largest number of visitors to Sumter County. A total of 36,024 sightseers visited that month. The other three busiest months of 2016 were September (29,650); May (28,994); and July (28,062). Despite the summer heat, the July visitation number was the highest in at least six years.
Americus and its hotels experienced a rise in occupancy in 2016 in every month from July through December. Final hotel/motel tax collections for the entire year totaled $314,844, an increase from $313,528 in 2015.
“This continued rise in visitors proves that our tourism product is strong. We will continue to monitor trends and find new and exciting ways to attract new visitors,” said Nicole Thurston, director of tourism for the city of Americus.
In all, residents from at least 38 states and Washington, D.C., and at least nine foreign countries stopped at the Americus Welcome Center for information en route to destinations across the county. In fact, residents from more than two dozen states had visited in the first three months of the year alone.
In addition to every Southern state, the states included Nevada, Nebraska, Rhode Island, Oklahoma, Colorado, Minnesota and North Dakota, among others. Visitors from Canada, Australia, United Kingdom, India, Cambodia and Ireland were among the foreign stopovers who signed their names in the guest registries at the Americus Welcome Center. Guests from Germany visited in February, from Japan in August, and from Spain in November.
Tourists most often continued to flock to Andersonville, site of the Andersonville National Historic Site and the Village of Andersonville. While the National Historic Site, home of the National Prisoner of War Museum, drew 128,268 visitors for the year, the Andersonville Welcome Center and the Drummer Boy Civil War Museum outpaced its previous year, drawing more than 1,000 visitors a month eight different times.
Both May and July, which see a surge each year due to Memorial Day and the Fourth of July, outpaced visitorship from 2015. And the month of October, when Andersonville Village celebrated its 40th annual Historic Fair, saw nearly 2,000 visitors stop at the Drummer Boy Museum as well.
The Andersonville National Historic Site drew more than 10,000 visitors a month eight different times also. The month of May was the largest, with 16,469 visitors being counted at the National Historic Site.
In Plains, the Jimmy Carter National Historic Site experienced its largest month in September, when 10,933 visitors stopped by. The Plains Peanut Festival, held Sept. 24, saw one of its biggest crowds in years, organizers say.
In addition, tourists continued to enjoy rides aboard the SAM Shortline Excursion Train all year. For 2016, ridership was up 5 percent over 2015, despite cancellations early in the year due to an underground natural gas pipeline project in the area, and running three fewer trains.
According to Terry Miller, site manager of the Historic SAM Shortline Railroad, December was exceptional, with an increase in passengers of 38 percent over 2015. Total ridership for the year was 22,594, according to Miller. “We will be announcing our 2017 schedule shortly and be launching a new website and ticketing system,” for the new year, Miller said.
— Submitted by Americus-Sumter County Tourism Council Inc.