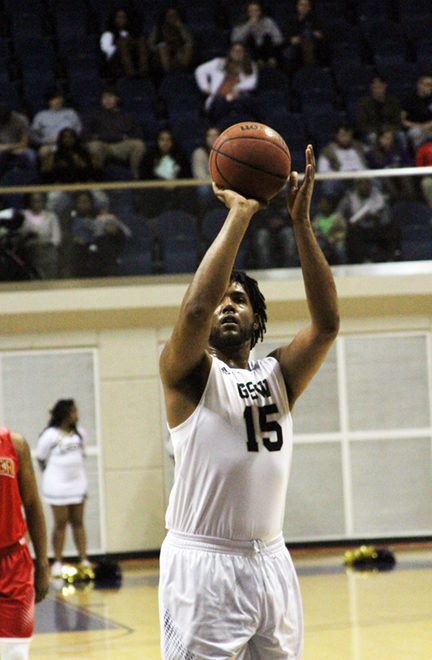 MICHAEL MURRAY I ATR: GSW’s Rakeem Hicks lines up a free throw during a mid-January contest at the Storm Dome in Americus.

The Georgia Southwestern State University GSW) men’s basketball team was on the wrong side of an 18-0 second half run on Jan. 13 in Aiken, SC as USC Aiken pulled away to hand the Hurricanes a 77-64 loss.
The team continued their road stint on Jan. 16, traveling to Savannah to battle Armstrong University. Cameron Dozier scored 18 points in the first half of that match. Brandon Price scored 18 in the second half. Together, the senior guards helped lead the Hurricanes past Armstrong State University, 83-72.
With the Savannah victory, GSW picked up its first road win of the season and improved to 5-10 overall and 3-5 in the Peach Belt Conference.
In the match-up against USC Aiken, The Hurricanes kept the game close in the first half. Dozier sank a pair of free throws with 7:02 left until the break to tie the game at 18-18. USC Aiken scored on its next possession and led the rest of the way. A three-pointer by Henry Bolton III in the closing seconds of the half put the Pacers ahead 35-28 at halftime.
GSW’s Devin Watson made a layup with 16:18 to play to pull the visitors within four points, 42-38, but the next five minutes proved to be the Hurricanes’ downfall as they committed six turnovers and missed their only three shots during the decisive 18-0 run.
USC Aiken finished with more rebounds (42-34) and assists (18-13) in the contest while utilizing a 17-4 fast break advantage to pull away from the Hurricanes.
Dozier led GSW with 17 points, six rebounds and seven assists. Watson hit three of four from three-point range en route to his 15 points. Price chipped in 12.
Two days later, the ‘Canes made up for the loss with their victory over Armstrong.
The Hurricanes turned in their best shooting performance of the season, connecting on 58.8 percent of their attempts, including 46.7 percent from beyond the arc. It’s the second time in four games that GSW finished with a shooting percentage over 50 percent. For good measure, they added 16 of 20 (80 percent) from the charity stripe.
GSW grabbed the early advantage when Dozier drained a three-pointer with 18:14 left in the half to go on top, 7-4. A 10-0 run midway through the period, capped by a Tevin Wise three-pointer, gave GSW its largest lead of the opening stanza, 31-20.
Armstrong answered with an 8-0 run of its own and wrestled the lead away in the closing minute of the half to put the Hurricanes down at the break, 44-40.
Then, it was time for the Price show. Price scored the first 10 points of the half for GSW and outscored Armstrong, 10-2, to give the Hurricanes a lead they would not relinquish. GSW added an 11-2 run moments later, with the help of six more points from Price, to build a comfortable cushion that was maintained until the final horn.
Price finished with a game-high 27 points, added six rebounds and four assists. Dozier connected on eight of 12 shots, joined Price with six boards, and finished with 24 points. Cameron Clayton sank five of seven from the floor, chipped in 12 points and snagged a team-best seven rebounds.
Armstrong had its own two-headed scoring attack with Corey Tillery and Jamison Jeffers. Tillery finished with 23 points and Jeffers added 22. Denzel Council finished a point shy of a double-double with nine points and a game-high 10 rebounds.
The Hurricanes return home to host the University of North Georgia on Saturday at 3:30 p.m.