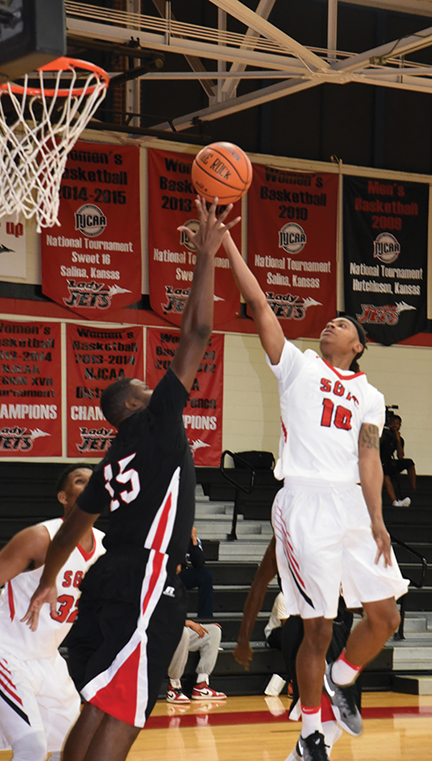 SUBMITTED BY SOUTH GEORGIA TECHNICAL COLLEGE: SGTC’s Jalen Thomas (10) set the scoring pace for the Jets in their 105-78 victory over Albany Tech.

AMERICUS – The South Georgia Technical College (SGTC) Jets and Lady Jets both captured Georgia Collegiate Athletic Association victories recently against the Albany Tech Titans at the Hangar in Americus. The Lady Jets remained undefeated in Division I of the Georgia Collegiate Athletic Association (GCAA) conference with an impressive 67-33 victory over the Lady Titans and then the Jets came back and beat the Titans, 105-78.
The Dec. 18 win moved the Lady Jets to 5-0 and kept them in first place in the conference. The Lady Jets followed this victory with a 91-39 thrashing of Chattahoochee Technical College on Dec. 21, boosting the team’s record to 6-0 in the conference. They are currently18-3 overall this season.
The Jets earned a significant win (105-78) over Albany Tech as well before returning to the hardwood on Jan. 21 to battle Gordon College. Despite an admirable performance, the Jets suffered a 78-61 defeat.
The Jets are now 2-3 in the conference and 8-11 overall. They are in fifth place in the conference behind Georgia Highlands, Central Georgia Tech, South Georgia State College, and Chattahoochee Tech.
The Lady Jets started out slow but were still up 15-11 at the end of the first quarter. They rallied in the second quarter to outscore Albany Tech 24-4 and pull ahead 39-15 at the half. They held Albany Tech to eight points in the third quarter and went on to win 67-33.
“We did what we set out to do,” said SGTC Athletic Director and Lady Jets Head Coach, James Frey. “We wanted to hold them to under 40 points tonight and keep them from making more than 30 percent of their shots. We were able to do both and take the win.”
The Lady Jets were led in scoring by sophomore guard, La’Deja James, with 15 points. Both Camille Coleman and Kanna Suzuki added 10 points. Desiree Corbin scored nine points and pulled in 14 rebounds while Trakyra Kidd scored eight points.
In the second half of the conference double-header, the Jets pulled ahead 48-31 over Albany Tech in the first half and expanded on that lead in the second half to break the scoreboard for the first time this season by scoring 105 points. They captured the win 105-78.
Jalen Thomas took top scoring honors with 21 points while Andre Kennedy followed closely with 19 points. Bobby Jackson, Ed Jones, and Pat Welch each added 12 points and Derrick Traywick and Marquel Wiggins scored nine points each.
“We were pleased with the win,” said Jets head coach, Travis Garrett. “I thought we played with intensity and any time you can get a conference win; it is a good night.”
The Jets took on Chattahoochee Tech on Jan. 24 in Americus. The results of this meeting were not available at press time.
The Jets and Lady Jets will return to action on Atlanta on Jan. 8, battling Atlanta Metropolitan College in a conference double-header.