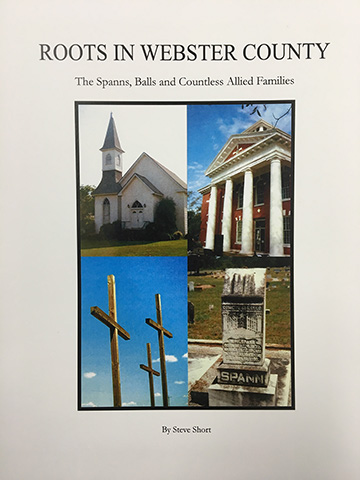 AMERICUS — Readers with ties to Webster County will be interested in a new genealogy book written by local author Steve Short.
“Roots in Webster County / The Spanns, Balls and Countless Allied Families” was recently printed by Gammage Print Shop in Americus. The book is Short’s third of four that he plans to write on each of his grandparents’ families. This book is the largest of the three completed thus far, and contains 595 pages. An index of surnames and many place names is included at back.
The primary subjects of the book are John Griffin Spann and Anna George Ball Spann, Short’s great-grandparents who both were Webster County natives. The completion of the book coincides with the 60th anniversary of the death of Anna Ball Spann in 1956. Though intended to be published in July, the book’s completion was delayed by the author’s diagnosis with a very rare form of leukemia shortly thereafter. Short is happy now to unveil the stories of the lives of John and Anna Spann, their descendants, their ancestors, and their siblings and families. Hundreds of historic photographs complement the stories throughout.
The book not only includes the Spann and Ball families, but hundreds of other southwest Georgia families as well. In all, more than 900 surnames are found throughout. In addition to Spann and Ball, 10 of the most familiar names include Cole, Sapp, Boyd, Montgomery, Stapleton, Brightwell, Timmerman, Nicholson, Fletcher, Tracy, and Clark.
The towns of Preston and Weston are of key significance, but many other locations including Americus, Plains, Parrott, Dawson, Richland, and Columbus are referenced dozens of times as well. The community of Center Point and Macedonia Baptist Church is a centerpiece of the book. Anyone with connections to Webster County will find the book especially meaningful.
Family ties to the late U.S. Sen. Walter F. George are explained throughout. The longtime senator, perhaps Webster County’s most notable figure, was a cousin of Anna Ball Spann. Interestingly, Anna’s middle name was “George.” Anna, in turn, named her own son Walter Franklin “Frank” Spann, the author’s grandfather, for the popular senator.
Both the Spann family and Ball family trace their roots to the founding fathers of Webster County in the 1850s. One of John G. Spann’s grandfathers was a first commissioner; one of Anna Ball Spann’s grandfathers was a commissioner as well.
Concerning their own descendants, the book relates that of the 10 grandchildren of John and Anna Spann who lived to adulthood, five – or half – graduated as either valedictorian or salutatorian of their respective high school classes. In later years, one grandchild became a brother-in-law of a U.S. president; another became a first lieutenant in the U.S. Army; another was a nominee for Georgia Caregiver of the Year Award in 2008; and another has a high school press box named in his honor.
Great-grandchildren today include accountants, journalists, and farmers. Great-great-grandchildren include corporate attorneys, general managers, college athletes, and artists.
In the introduction, Short credits his grandfather, who lived to be 90 years old, for his help in spurring interest in genealogy. He also pays tribute to his late great-aunt of Columbus and many others, including his mother, for help in sharing the families’ history. The book is dedicated in memory of both Short’s sister, Anne Short, and first cousin Susan Webb.
For more information or to purchase a copy, you can contact Short at 770-354-6576 or email steveshort86@att.net. The book also will be on sale at Mom’s Kitchen in Preston and at Merritt Pecan in Weston while supplies last.