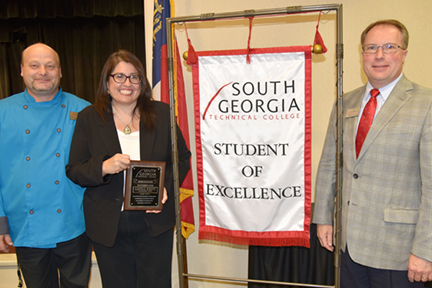 SUBMITTED BY SGTC: Linda Kent (center) is shown with SGTC Vice President for Academic Affairs David Kuipers (far right) and her nominating instructor Ricky Watzlowick (far left) and the Student of Excellence banner that will hang in the culinary arts program area until the next Student of Excellence is named.

AMERICUS — Linda Kent of Montezuma, a South Georgia Technical College (SGTC) culinary arts student, was named a SGTC Student of Excellence for October during the college’s recent student recognition ceremony held in the John M. Pope Industrial Technology Center on SGTC’s Americus campus.
Kent received a plaque of recognition and a financial award from SGTC for her accomplishments. She was nominated for this honor by SGTC culinary arts instructor Ricky Watzlowick.
“I feel so excited, blessed, and honored to be nominated,” said Kent, who thanked her instructors, family, classmates, and the staff and faculty of SGTC for their support. “It was scary to come back to school a little later in life,” admitted Kent, “but I love learning new things. South Georgia Tech is such a wonderful environment to learn in.”
“Linda is originally from California, so she brought a whole new culinary taste to the program. She’s tried and seen foods that the rest of the class hasn’t been exposed to,” said her nominating instructor, Watzlowick. “When you meet Linda, it’s very obvious that she loves and is very close with her family, and she brings that sense of warmth into the classroom and shares it with her fellow students.”
Each month, students from certain divisions selected for that month are nominated for the Student of Excellence award by their instructors. The October ceremony recognized students in health and personal service programs at SGTC. The winner is selected based on a number of criteria, including grades, work ethics, participation in clubs and organizations, and amount of program completion. Each nominee is presented with a certificate and a SGTC Student of Excellence T-shirt.
Other nominees included LaWarrior Gardner of Americus, barbering; Elizabeth Lumpkin of Coleman, cosmetology; Judashia Eley of Americus, criminal justice technology; Norma Hardester of Americus, early childhood care and education; Grady Barfield of Americus, fire science; Lindsey Massey of Rupert, medical assisting; and Taylor Hatfield of Americus, practical nursing. 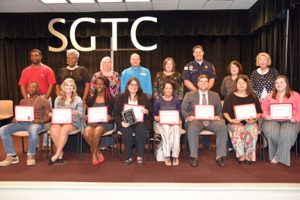