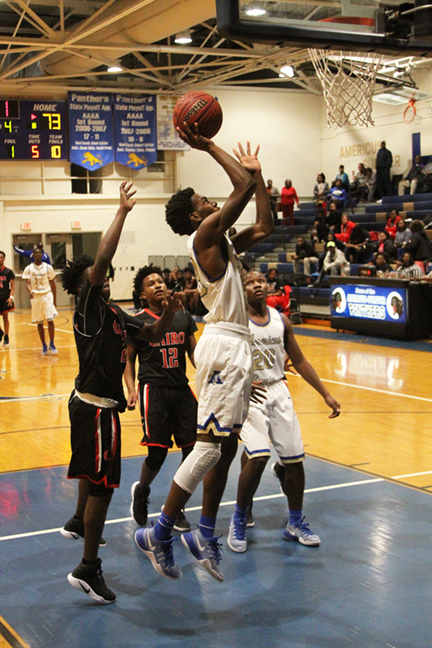 MICHAEL MURRAY I ATR: ASHS’ Jakhari White tosses up a shot during a Jan. 24 contest in Americus. White contributed six points to the Panthers’ win over Hardaway on Jan. 27 in Columbus.

The Americus-Sumter High School Panthers grabbed a pair of Region 1-AAAA wins on the basketball court over the weekend to boost the team’s region record to 10-1. With the Panthers’ overall record of 18-4, the team is currently in first place in the region, followed by Westover with an overall record of 13-7.
In the weekend’s action, the Panthers rolled over Hardaway High School on Jan. 27, 68-33, in Columbus before returning to the Panther Den in Americus the following evening to defeat the Columbus High Blue Devils 61-45.
The Jan. 27 match-up saw the Panthers pull ahead early, outscoring their hosts 21-9 in the first frame before riding this wave of success into the second quarter to take a 43-11 lead into the second half.
The ASHS boys continued to pull ahead in the third stanza, outscoring their opponents by three points to advance their lead to 58-23. The teams went point-for-point in the final period, each scoring 10 points to give the Panthers the 35-point win.
ASHS’ Kiante Sims led the team’s scorers with nine points contributed in the match, followed by Eric Brown, who tossed in eight. Eric Hall added seven more while Jurrell Jones and Jakhari White each put up six.
Stephon Luster led the team from long distance, hitting a pair of three-pointers.
Sims led the team in rebounds as well, coming down with seven total. Jones pulled in six boards.
Joshua Lusane dished out five assists in the match as Karmil Hamilton added three more.
Lusane and Brown led the team in steals, with three apiece. Hall contributed a pair of blocked shots in the contest.
The Panthers then returned to their home court on Jan. 28 to battle Columbus High.
The ASHS team got off to an uncharacteristically slow start in the weekend closer, falling into a one-point hole (9-8) in the initial quarter. The Blue Devils expanded their advantage before the half-time break by seven points, taking a 25-17 lead into the locker room at intermission.
The Panthers wouldn’t be held back for long, however. When the teams returned from the locker room, the Panthers stepped up their game to add 27 points to their total while giving up only 11. With a 44-36 lead heading into the final period, the Panthers bested their foes 17-9 to earn the 16-point win at the final buzzer.
Sims, once again, led the Panthers in scoring with 17 points in the contest, coupled with 10 rebounds.
Lusane joined Sims in the double-digit club with 10 points. Hall added another nine points to the Panthers’ tally and White tossed in seven.
Jones pulled in six rebounds while Zyriech Allen grabbed five.
Stephon Luster led the Panthers in assists with five and Hamilton set the pace for steals with four.
Sims, Allen, and Lusane each blocked three shots in the tilt.
The Panthers returned to the court in Americus on Jan. 31 to battle the Shaw Raiders. The results of this contest were not available at press time.
ASHS will hit the court again in Americus on Feb. 2, taking on the Hardaway Hawks.