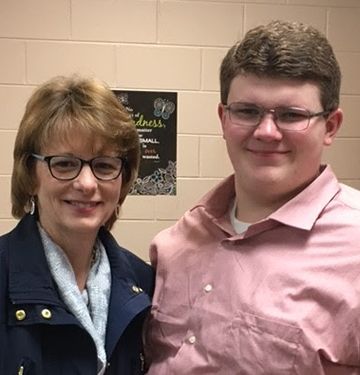 ELLAVILLE — Doug Goodin, son of Doug and Heidi Goodin of Americus, has been named STAR Student for Schley County High School. He has named Patti Wurtz as his STAR Teacher.
The STAR student has the highest test score on the SAT and is in the top 10 percent of his class in grade point average.
Goodin and Wurtz have known each other since he was in seventh grade, and she has taught him in drama and coached his many performances on stage and in area and state literary meets, where has repeatedly won first-place finishes.
Goodin is currently the senior class president, president of Sr. BETA Club, a member of FBLA and SADD. He spent last summer as a page in Washington, D.C., for Sen. Johnny Isakson, and is an Eagle Scout. He plans to attend the University of Georgia and double-major in political science and theater arts.
Wurtz has been teaching since 1980, and this makes her fifth time being selected as a STAR Teacher. Many of the students who have selected her have been impacted by her love for theater. Each year, she takes students and adults to New York City in the spring or summer, and at least once a year takes a group to the Fox in Atlanta to see Broadway productions. Her drama classes often travel to Agatha’s in Atlanta for a murder mystery dinner, and she produces local murder mysteries for a “dessert theater” each year. Her passion and influence continue to transform the students in Schley County.