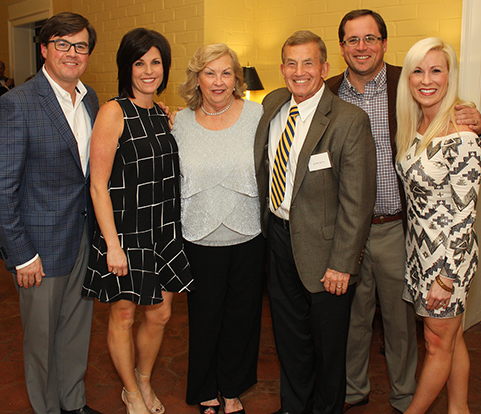 Sparky Reeves, third from right, stands with his family during the Southwestern Sweethearts event where he was given the Aeolian Award. From left are Kevin Reeves, Jenny Reeves, Allene Reeves, Sparky Reeves, Ryan Young, and Mandy Young.

AMERICUS — At a “Southwestern Sweethearts” event Feb. 4, celebrating those that met at Georgia Southwestern State University (GSW) and later married, Sparky Reeves, president emeritus at South Georgia Technical College (SGTC), received the University’s top alumni honor, which is given by the GSW Alumni Association. Reeves was named the Aeolian Award recipient by Alumni Association President Lemond Hall.
“I am truly humbled and honored to receive the Georgia Southwestern State University Aeolian Award,” said Reeves. “The University has been a part of my life for the past 50 years. As an undergraduate, I was not only given a great education but was also able to develop leadership skills through fraternity and service organizations on campus.
“As a graduate student, I was able to prepare for the leadership responsibilities that I assumed at South Georgia Technical College,” Reeves continued. “I was fortunate as president of SGTC to work with five GSW presidents: Drs. King, Capitan, Haynes, Blanchard, and Patterson. I would be remiss if I did not mention the most important outcome of attending GSW — it is where I met a young co-ed from LaGrange, Georgia, Allene Camp, who would later become my wife. What a great time we had at GSW.”
The Aeolian Award, named after the University’s alumni magazine, recognizes GSW alumni who have distinguished themselves in their profession and through service. This award is chosen based on outstanding lifetime achievement as a GSW graduate and a community leader and is not given annually. Rather, it is presented based on merit. The recipient is nominated by a committee of the GSW Alumni Association board of directors and is approved by the full board. 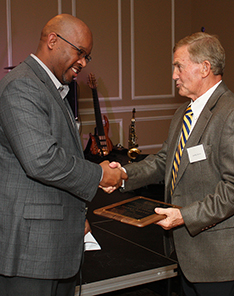 Reeves, who retired after 11 years as president of SGTC in 2015, worked in the state’s technical college system for over 42 years. While at South Georgia Tech, he was instrumental in building partnerships with local and regional businesses such as Caterpillar, John Deere and Kauffman Tire in order to assist students with career opportunities while fulfilling the workforce needs of the community.
In August 2016, Reeves was named to the board of firectors for the Technical College System of Georgia Foundation. The Americus-Sumter County Chamber of Commerce named him “Volunteer of the Year” in 1993 and 1998; he was given the Outstanding Service Award by the Chamber in 1991, and Reeves was named the inaugural Sparky Reeves Sumter Trustee Award recipient by the Chamber in February 2016.
Reeves earned a bachelor of science in business from Georgia Southwestern College in 1971. While a student, Reeves was involved in many student organizations, one of which was the Pi Kappa Phi Fraternity.
He and his wife, Allene (GSW ’73), reside in Americus.