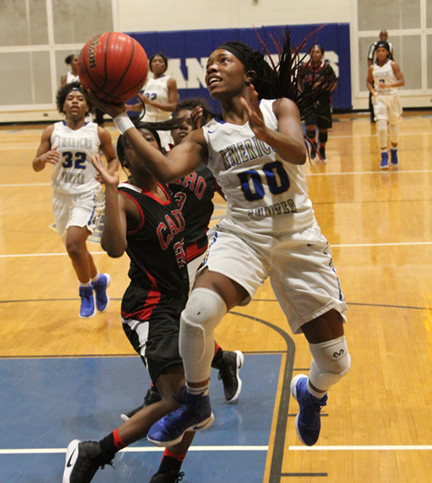 MICHAEL MURRAY I ATR: ASHS’ Myesha Carson leaps up from the lane to score a bucket during the Lady Panthers’ Feb. 7 tilt against Cairo in Americus.

AMERICUS – The Americus-Sumter High School (ASHS) Lady Panthers kicked off the Region 1-AAAA tournament on Feb. 7 at their home court in Americus with a 77-37 defeat of longtime rivals, the Cairo High School Lady Syrupmakers.
The Lady Panthers faced Columbus High in their second tilt of the Region 1-AAAA tourney, taking a 63-44 defeat, much to the chagrin of the visiting fans. The ASHS ladies participated in a consolation match on Feb. 10. The results of this tilt were not available at press time. As of this writing, the Lady Panthers enjoyed a 23-4 overall record and a 12-3 region performance.
With their first-place standing in Region 1-AAAA, the ASHS boys’ team earned a bye in the first round of the tournament. The Panthers defeated the Shaw Raiders 58-55 on Feb. 9, earning the right to battle Carver High School on Feb. 11 for the region title the Tigers’ home court in Columbus. The Panthers enter the contest with a 13-2 region record, while Carver currently sits at 10-4. The teams are 1-1 in their previous two meetings during the 2016-17 season.
The ASHS ladies got off to a fiery start in their first post-season game of the year, though a Cairo sharpshooter opened the scoring with a three-pointer five seconds after tip-off. Moments later, ASHS’ Timia Swanson converted a rebound to bring the Lady Panthers within one and Zari Mays followed with a Jykiera Long-assisted lay-up to put ASHS ahead. The Cairo squad would not see another lead for the remainder of the contest, though they did manage to tie the score 6-6 at the 5:30 mark of the first frame, following a J. Long lay-up with another three-pointer.
From there, Mays tossed in another rebound to spark a 15-4 run from the Lady Panthers. Highlights of the second portion of the first frame included a steal by Swanson that resulted in a fast-break bucket, a trio of assists from ASHS’ Deasia Ford, and a last-minute block by Swanson.
The Lady Panthers took a 23-10 lead into the second stanza.
Tykiera Long got in on the action in this frame with a distant jumper, as did Dekeyvia Blackshear with a lay-up. Near the end of the quarter, Shidajah Johnson made her presence known by nabbing a steal and breaking away for a lay-up. Johnson followed immediately with a Swanson-assisted lay-up and Mays contributed a block to keep the Lady Panthers’ momentum going as half-time approached.
Just before the one-minute mark, the Cairo High School coach made a rarely-seen call and pulled each of the visiting teams’ active players off the floor. She then sent five fresh players in off of the bench in hopes of turning the tide of the game. One glance at the final score will certainly give any fan a good idea of how well that strategy panned out. The Lady Panther took a 37-19 lead into the locker room at intermission.
ASHs’ offensive onslaught continued when the players returned to the court, with J. Long, Mays, Ford, Johnson, Blackshear, and Swanson each continuing to contribute to ASHS’ ever-expanding lead.
By the beginning of the fourth quarter, the Lady Panthers had doubled their opponents’ tally 60-30 and the teams commenced the six-minute final period.
The Lady Panthers outscored their guests 17-7 in the last stanza to earn the 40-point win and the right to proceed to the next round of the region tournament. 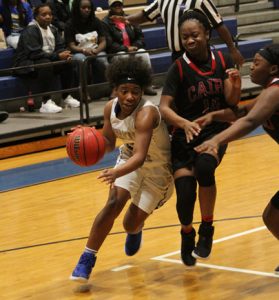 J. Long set the pace for the Lady Panthers’ scorers, contributing 18 points to the ASSHS win. J. Long also dished out a pair of assists. Three other team members joined her in double digits; Mays (16points), Swanson (15 points), and Johnson (10 points).
Swanson led the team in assists, with nine, followed by Ford, who dished out five. Swanson also led the team in steals, with six. Johnson nabbed a pair of steals while Mays and T. Long each contributed one. Swanson, Mays, and Blackshear each blocked opponents’ shots in the win.
Details of the Lady Panthers’ and Panthers’ Feb. 9 match-ups were not available at press time.