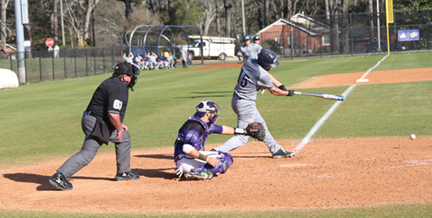 MICHAEL MURRAY I ATR: GSW’s Josh Logan nails a hard grounder past the visiting shortstop to put the game away for the Hurricanes with a walk-off single in the bottom of the ninth inning of the team’s Feb. 11 match-up against Kentucky Wesleyan.

AMERICUS – The Georgia Southwestern State University Hurricanes baseball team kicked off their second weekend of 2017 competition with a flourish on Feb. 11, earning a last-minute 3-2 win over the Kentucky Wesleyan Panthers with a walk-off single from Josh Logan.
In the afternoon’s nightcap, the Panthers evened the score with a 4-3 win over the Hurricanes.
The following day, GSW faced the University of West Alabama Tigers at Hurricane Field, taking a tough loss.
Following the weekend series, the Hurricanes slide to a 3-3 overall record on the 2017 season.
The ‘Canes’ first match-up of the weekend was an exciting one.
The Panthers opened the scoring early with an RBI in the first frame. The Hurricanes negated the threat in the bottom of the first when Zach Barron belted a single to plate Evan Alderman.
The GSW squad struck again in the bottom of the third stanza when Logan singled, allowing Barron to come in.
The Hurricanes then held the Panthers scoreless until the top of the ninth, when the Kentucky Wesleyan squad tacked on an unearned run, leaving the score tied 2-2 when the Hurricanes returned to the dugout.
GSW’s Dakota Long opened the final period with a single before advancing to second as Barron offered up a sacrifice bunt. Alex Kranick and Jared Jones then took a pair for the team when they were plunked by a pair of errant pitches. With two outs and the bases loaded, Logan stepped up to the plate.
In a very tense moment at Hurricane Field, the fans watched intently as the Panthers’ pitcher gradually racked up a full count. With the pressure on, Logan took a powerful swing as pitch number six hurled towards him. The home fans cheered as his bat made contact, sending a bouncy grounder just out of reach of the visitors’ shortstop. Long quickly scurried to the plate as the team celebrated their tight win.
Alderman racked up a trio of hits on his four at-bats to lead the ‘Canes from the batter’s box. Two of Alderman’s hits resulted in triples.
Logan added a pair of hits, while Jones, Kranick, Barron, Long, and Diamyn Hall each connected on one.
Kyle Spinks opened on the hill for the Hurricanes, pitching five innings. Spinks struck out one batter before transferring hurling duties to Jared Crum, who tossed 3.2 innings and struck out two batters. Mitch Holloway is credited with the save after striking out the Panthers’ final batter.
Following a brief intermission, the teams returned to the diamond to complete the double-header.
GSW got off to another strong start in the seven-inning match, though the Panthers put the first mark on the board in the third stanza.
In the bottom of the third, the Hurricanes took off on a rally, sparked by a Jones double to left field that scored Kranick. Clay Patrick then added a base hit before Alderman followed suit, bringing in Jones. Will Redding then belted a shot to left field, bringing in Patrick and leaving the ‘Canes up 3-1.
The GSW squad diligently protected their lead over the following two frames, but the Panthers kicked off a rally of their own in the top of the sixth which netted the visitors three runs. This proved to be enough to earn the Panthers the 4-3 win.
Redding connected on a pair of hits in the nightcap after three at-bats. Jones, Kranick, Alderman, and Patrick each contributed hits to the GSW cause in the second tilt of the afternoon.
Dylan Brown struck out four batters in four innings of work before ceding the mound to Matt Hubbard, who pitched one inning. AJ Haynes is charged with the loss after striking out one batter in two-thirds of an inning. Holloway struck out Kentucky Wesleyan’s final batter.
Details of the Hurricanes’ Feb. 12 defeat were not available at press time.
The Hurricanes will return to action on Feb. 15, traveling to Carrollton to face the University of West Georgia. The GSW squad will return to Americus on Feb. 17 to host North Greenville University. The series will culminate in a double-header on Feb. 18.