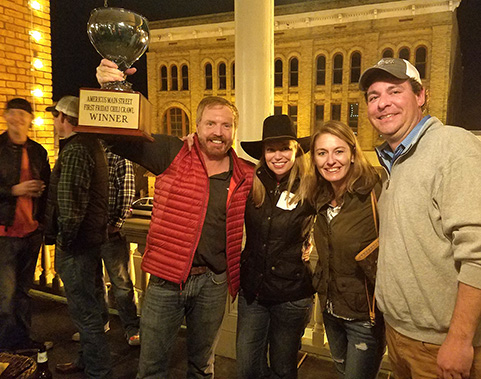 AMERICUS — This first Friday of every month is a time for celebration and community building in the downtown Americus, and for the month of February this celebration took the form of a good old-fashioned Chili Crawl. If you happen to be unfamiliar with Chili Crawls, the concept is pretty simple. Thirteen businesses downtown broke out their secret family recipe, grabbed their largest pot, and cooked up a whole mess of chili for people to sample.
Just because they were all cooking chili, doesn’t mean there wasn’t plenty of variety out there. There was everything from a white chicken chili, to a sweet and spicy chili, and they even had some authentic Texas-style chili. There 65 gallons of chili made in Americus that night, being that each contestant was required to bring five gallons each for tasting.
But it wasn’t as simple as just cooking chili because it was also a competition to see who made the best pot of chili in town. Bragging rights and a nice large trophy were at stake. Tasters picked up a scorecard and a map at the welcome center, which was also the first stop of the Crawl, and off they went exploring downtown and sampling the fine chili the businesses were offering. The chili stations were set up outside the actual stores and offices so, there was a fair amount of walking involved but the city had the trolley running to make things a little easier. Having the chili stations at the actual businesses also served as a good way to introduce people to places they may not have known existed.
The Crawl lasted from 5-8 p.m., and the winners of the Crawl were announced at 9 p.m. on the veranda at Floyd’s. Third place went to The Kinnebrew Company’s “Hulme Cooked Chili”, a three-meat styled chili that included chucks of bacon. Second place went to the Americus Fire & Emergency Services who stuck with a more traditional chili. First place trophy and winner of the first Americus Chili Crawl was the Hooks Agency and their “Cirkus Chili”. The “Cirkus Chili” requires a little bit of an explanation, because their entire neighborhood got together to make this one pot of chili and they threw just about everything they could think of in the pot. They wound up with a sweet and spicy chili that tasted absolutely phenomenal.
The winning cooks gave a short acceptance speech, which mostly consisted of claims that they were going to take the chili to a larger chili cook off competition and “put Americus on the map.” Finally, overcome with victory the winners took a celebratory drink from their new trophy.
The Chili Crawl was the main event of this First Friday, but it wasn’t the only thing going on. Several other businesses downtown were offering sales and discounts. The Rylander Theatre offered a free organ concert from 5-6 p.m.. The Americus Center for the Arts had a glass blowing demonstration. Mobile Glassblowing Studios also had a glassblowing demonstration, world-famous glassblower Fritz Dreisbach.
The First Friday celebration for February turned out to be a fun night full of community, entertainment, and tasty chili.