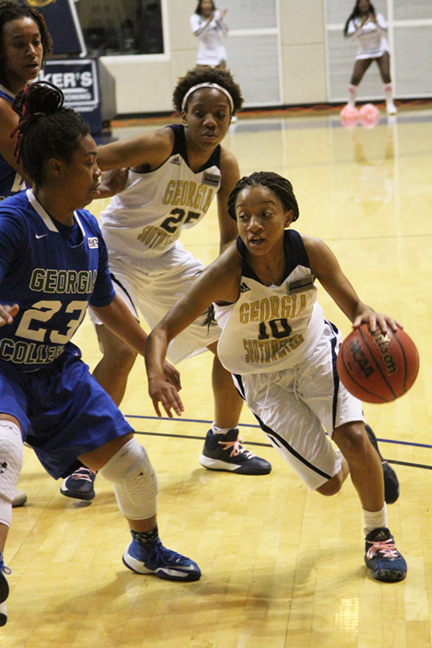 MICHAEL MURRAY I ATR: GSW’s Kaya Cochran drives the lane in the first period of the Lady Hurricanes’ home closer against Georgia College on Feb. 15.

AMERICUS – Four of Georgia Southwestern State University’s (GSW) womens’ basketball players scored in double digits in their 73-57 win over Georgia college on the evening of Feb. 15 in the Storm Dome for the team’s final home tilt of the season.
GSW improved to 13-11 overall and 8-9 in the Peach Belt Conference while Georgia College moved to 12-7, 6-6 PBC.
The game got off to a slow start as both of the rival teams dug in their heels and refused to give the other any offensive leeway. The first quarter was tied 3-3 with 6:17 remaining when the Lady ‘Canes saw their opportunity and went on a 14-point scoring spree to finish off the period.
Aleah Holden sparked the rally with a layup. Gabby Figgers followed with a three-pointer before Kris Beckham tossed in a jump shot. Chanice Whitton followed with a lay-up before Kya Cochran put in a three-pointer of her own. Shanya Jones finished it up with a lay-up to put the Lady ‘Canes up 17-3 heading into the second quarter. 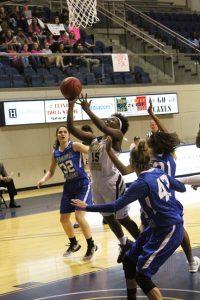 MICHAEL MURRAY I ATR:
GSW’s Aleah Holden tosses in a bucket during the first quarter of the Lady ‘Canes’ final home tilt against Georgia College on Feb. 15.

Georgia College out-scored GSW in the second quarter 18-10. The Bobcats went on an 11-point run to come within five points of the lead and, with 58 seconds left, were within three points. Brittany Grant made two free throws to end the second quarter and GSW headed into halftime up 27-21.
GSW held Georgia College to nine points in the third and ended the period with an eight-point run. Beckham kicked it off with a lay-up. Whitton added a layup and a free throw as Grant prepared to finish it off with a trey to head into the final quarter up 49-30.
Georgia College out-scored GSW 27-24 in the fourth and came within 13 points of the lead, but the Lady ‘Canes defense kept fighting and they took the 16-point win.
Grant recorded 13 points. Both Whitton and Beckham scored 12 points and Figgers added 11 more. Whitton picked up nine rebounds for GSW.
The Lady Hurricanes are on the road on Feb. 18 to play Young Harris at 1:30 p.m.