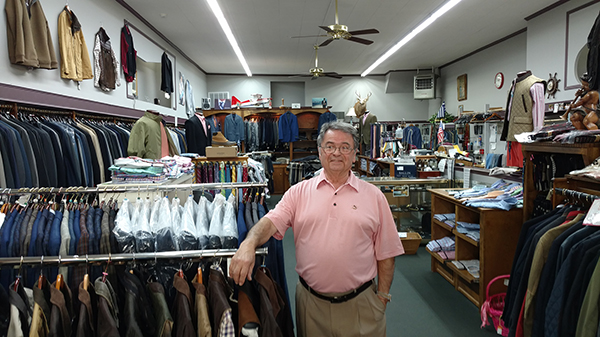 George Saratsiotis is shown in his downtown business, George’s Men’s Wear, under his new lights.

AMERICUS — George Saratsiotis owns a men’s wear and tailor shop downtown, and thanks to a new grant program offered by the City of Americus, he was able to replace his old fluorescent tube lighting with new LED lighting. This program is called the Downtown Americus “Turn The Lights On” program. The program offers a 50/50 matching grant and is paid out as a reimbursement after the work is finished.
Saratsiotis’ new lights have brightened up his store, but that isn’t the only benefit that he’s received. LED lights use considerably less energy than the old fluorescent tubes, and on top of that he’s actually using half the number of bulbs now. His customers seemed to be pleased with the new lighting.
Saratsiotis isn’t the only one who has taken advantage of the grant program. Sylvia Rustad is opening a new juice bar downtown; it is actually right next to George’s, and the grant program has certainly come in handy for her. Back when she first started working on Juiced she discovered that the building didn’t actually have power, but luckily that was covered by the lighting grant. So not only did the grant help her get some new lights for her store, it also helped her get power back to the building, install several new outlets that she needed, and even got her some new fire exit signs. Juiced isn’t open yet, so obviously there hasn’t been a response from her customers. Instead she has had people who were walking by the store comment on how they can’t believe how much the place has changed.
The grant has directly helped out at least two downtown businesses, but there is actually a third business that has benefitted. Wayne’s Electric did the work for both stores, so all in all the grant has been extremely beneficial to Americus.