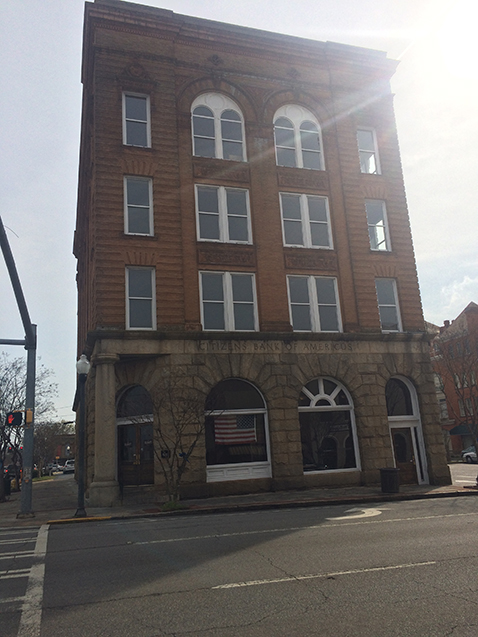 Dillinger’s is located at 120 N. Lee St. in downtown Americus. The bar, in addition to several others in other Georgia towns, was searched by the FBI and IRS Tuesday.

AMERICUS — Underage alcohol sales might be the least of worries for the owner of a local bar. The Federal Bureau of Investigation (FBI), along with the Internal Revenue Service (IRS), served a search warrant at Dillinger’s, a bar in downtown Americus, Tuesday. Will Britt of Statesboro is the establishment’s owner.
Special Agent Stephen Emmett, of the FBI Atlanta field office, issued the following statement Tuesday morning.
“The FBI along with our IRS partners have executed several federal search warrants throughout the state in conjunction with an ongoing federal investigation, the details of which I cannot discuss at this time.”
According to WMAZ in Macon, two bars in Milledgeville were seized in the raids early Tuesday. Search warrants were also executed in Valdosta, Tifton, and Statesboro, and other towns.
According to the Statesboro Herald’s website, the home of Britt in Statesboro was also searched by the feds Tuesday, and was cordoned with crime scene tape. A former Statesboro City Council member, Britt was elected in 2003, serving three terms.
Britt, who also owns a bar in Tifton and three in Valdosta, as well as others, spoke at the meeting of the Americus Mayor and City Council on Feb. 23, asking to speak regarding the request for renewal of the alcohol license for the bar. He told the city that he helped bring Dillinger’s to Americus, and was speaking on behalf of Heath Cox, the license holder. Britt said that five years ago when the business came to Americus, he met with city officials, the building’s owner, and representatives of Georgia Southwestern State University and South Georgia Technical College to make sure everything was in code with the city. He mentioned the addition of a “$32,000 outside staircase” added to the building they lease downtown. He also said after the alcohol beverage license renewal application and check were sent in to the city and the check was cashed, Cox “felt things were moving forward” and the city gave Dillinger’s four tasks: education of staff about limiting service to intoxicated patrons, security cameras, hiring off-duty police officers to patrol in and around the business, and not serving underage customers.
Americus Police Chief Mark Scott recommended to council that the request for renewal be denied due to successive incidents at the bar including underage individuals being served alcohol who drank until they passed out and were injured, fights inside and outside the bar, and excessive noise in the parking lot. He mentioned several recent incidents at the bar and Steve Kennedy, city manager, said he has a file containing “40 pages” of incidents relative to the bar.
After much discussion, the city council voted 4-2 to grant the renewal of Dillinger’s alcohol beverage license and place the establishment on a 90-day probation period, during which no violations of the city ordinance regarding alcohol sales can occur.
An attempt to reach someone at Dillinger’s for comment was unsuccessful as of press time.