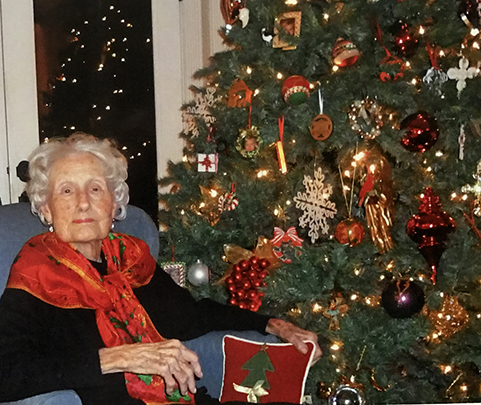 AMERICUS — She is a farm girl, teacher, wife, mother, grandmother, great-grandmother, great-great-grandmother, mentor, friend, and most importantly, a faithful servant of Jesus Christ. Regardless of the title, her family has witnessed many examples of their mother’s generosity and concern for others. These descriptions would piece together a portrait of Mildred Kinard Wilson. Her daughters were blessed to have grown up in a safe, secure, and encouraging home. Their parents exemplified traits that will continue to regenerate for years to come. Proverbs 22:1 extols, “A good name is to be chosen rather than great riches. Loving favor rather than silver and gold.” Both parents were great role models for working hard, being kind to others, and coping with life’s surprises. In fact, they not only coped with unexpected events, but also did so without bemoaning the fact that they had to endure those challenges. 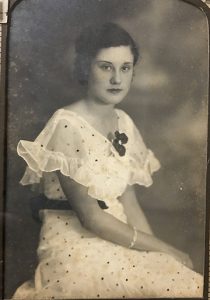 Mildred Kinard in her younger days,

Many facets go into creating the portrait of a life well lived. Growing up, her life centered around church. That never changed. As an adult, she taught a women’s Sunday school class from 1966-2002, a testimony to her commitment. In 1934, she graduated from Union High School, and is one of the two oldest living graduates, both of whom are centenarians. From 1934-1936, she attended Georgia Southwestern College from which she earned her normal diploma with a teaching certificate. When she got a teaching position in Cecil, Ga., she rode the train from her family farm near Leslie to Cecil and lived in Mrs. Cauley’s Boarding House just down the road from her school. The principal allowed her to walk back to the boarding house each day to eat lunch. While teaching junior high school and coaching girls’ basketball in Cecil, she completed a special course in Red Cross first aid and was certified in accident prevention as well as being appointed as a Red Cross first aid instructor. After two years of teaching, she ended her teaching career to marry Dock Wilson.
Dock Wilson’s store was the forerunner of the convenience store and was at that time considered to be on the outskirts of town (on Felder Street). Many people have told the family their remembrances of going to Dock’s where multitudes of children learned “to make change.” The husband and wife worked together in Dock’s Store for close to 50 years from the 1930s until Dock Wilson’s death in 1984.
Another important component is that Mildred Wilson has always been a caregiver to family and others. Starting with Bunk Wilson, Dock Wilson’s uncle, who was the original owner of the store. She fixed his meals for many years. Then, she cared for her mother throughout her declining health. After her mother’s death, she looked after her uncle, Tot Cheek who had never married. Her sister, Lucile Williams, was the last member of the family whom she lovingly took care of. One of her most endearing traits is one of sacrifice with no complaints. In fact, she even made those difficult times and tasks look easy.
No one knows for certainty why some people reach their 100th birthday, but one could speculate that surviving the “1918 Flu Pandemic” that killed an estimated 50 million people world-wide might have played a role in her longevity. At the age of one year, she was the only member of her family who was not sick, so perhaps she developed a strong immunity.
Thus, 3,153,600,000 seconds, 52,560,000 minutes, 876,000 hours, 36,500 days, 5,214 weeks  plus 2 days, 1,200 months, and 100 years are just numbers apart from a beautiful life filled with family and friends. In closing, a quote by Holley Gerth summarizes Mildred Wilson’s birthday: “A life well-lived and a heart well-loved are two of the best reasons to celebrate!”
— Submitted by Cindy Wilson Schaeffner