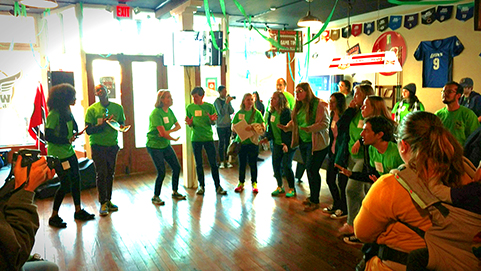 Cast members of Shrek the Musical sang songs from the upcoming Sumter Players' production during the recent March First Friday in downtown Americus.

AMERICUS — You may have noticed that downtown Americus looked considerably greener on March 3. Green balloons were attached to several of the businesses downtown; places were serving green beverages, and green decorations appeared in many of the businesses. So why all the green?
March 3 was the first Friday of the month, which means that Main Street Americus was holding the monthly First Friday festival. The theme for this month was Shrek, because the Sumter Players will be performing Shrek: The Musical March 9-12. This will be one of the largest productions that the Sumter Players have ever put on, so the city turned out in support of them.
Café Campesino was serving up special Shrek-themed drinks and snacks. Entertainment was provided by Joe Warther and his accordion, which led to an impromptu dance competition between some of the children.  And if the fresh lemon scones weren’t enough of a dessert, the Girl Scouts were also selling their famous cookies there.
If green lattes, accordions, and scones weren’t tasty enough, Bittersweet Bookstore and Coffeehouse had ice cream and gingerbread men. Bittersweet’s employees were also dressed as fairy tale characters and they had Rob Bailey on guitar for entertainment.
It wasn’t just sweets and colored lattes, however. Center Stage Market was offering samples of their tasty, and healthy products. They also had dieticians from Phoebe Sumter Medical Center who were there to offer up nutritional advice.
Downtown Americus’ newest business, Juiced, also joined in on the festivities. They were serving a special “Ogre-ade” juice and were showing a documentary about the benefits of juicing.
After sampling the tasty juices and snacks you could have gone to Allie’s Boutique which was offering discounts, but these discounts you had to earn through a game of pin the tail on the donkey.
Finally, down at the Mobile Glass Blowing Studio, three glass-blowers worked together to create a statue of Shrek.
There was one last major event that happened at the First Friday festival. The Sumter Players couldn’t let this goodwill and support go unanswered, so the cast of the play headed out to join in the fun. Once the cast reached the participating businesses they put on a quick performance of the musical numbers from the play. As always the First Friday celebration is meant to show off the art and culture of Americus, and this month’s celebration was a prime example of how much the people of Americus love the arts.