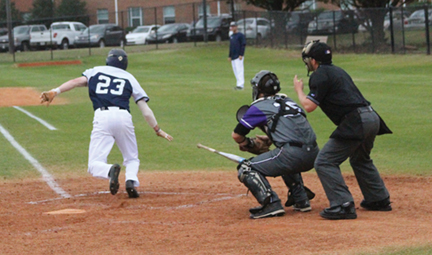 MICHAEL MURRAY I ATR: GSW’s Evan Alderman takes off for first base after connecting on a hit in an early-season contest in Americus. Alderman batted four for four in the Hurricanes’ PBC opener against Augusta on March 4.

AUGUSTA – The Georgia Southwestern State University (GSW) baseball team lost its Peach Belt Conference (PBC) series opener at Augusta University on March 4, 10-5, before storming back on March 5 with a doubleheader sweep of the Jaguars, 8-5 and 4-0, to win the three-game set at Lake Olmstead Stadium.
The Hurricanes have won three of their last four games and finished the weekend with a record of 7-11, 2-4 in the PBC, while Augusta dropped to 6-10, 2-4.
A five-run fourth inning proved to be the difference for Augusta in the series opener.
GSW jumped out to a 3-0 lead, sparked by a two-run home run from freshman, Jonathan Martin, in the second inning. Augusta answered with a two-run shot of its own in the bottom half of the second and pulled away with five runs in the fourth.
Evan Alderman led the Hurricanes’ offensive attack, going four-for-four with a double, one RBI, and one walk. Martin added two hits and two RBIs.
GSW used four pitchers in the game, with starter Kyle Spinks (0-2) taking the loss after three and a third innings on the hill. He surrendered seven runs, walked one batter, and struck out one.
The teams returned to the diamond the following afternoon to duke it out in the final two games of the series.
The Hurricanes rallied from two runs down in the seventh to take game two of the series.
GSW trailed 4-2 until Alderman plated Clay Patrick with a bunt single and later scored off a double from Zach Barron.
In the eighth inning, GSW added the game-winning run when Will Redding walked with the bases loaded. Jared Jones added a pair of insurance runs on the Hurricanes’ next at bat when he singled home Alex Kranick and Alderman.
Jones had three hits and three RBIs in the win. Alderman and Barron added two hits apiece.
GSW starting pitcher, Jordan McIlwain, (2-2) fought through three Hurricane errors and six hits to hold Augusta to four runs – two earned – over six and two-thirds innings. He walked four batters and struck out three. Lawson Stewart picked up the final out in the seventh inning and Mitch Holloway came on to get his third save of the spring with two innings of relief.
Brown turned in a masterful performance in the finale to guide the Hurricanes to a PBC series win. Brown retired the side in order in the third, fourth and fifth innings and took a no-hitter into the seventh. He scattered two hits over seven innings, walked five batters, and struck out seven.
GSW jumped on Augusta in the first inning with a two-out RBI single from Jones before Barron added an RBI single of his own two batters later in what would prove to be all the run support Brown would need.
Patrick belted a two-out a double in the fourth inning to stretch the Hurricanes’ lead to 3-0 and scored on the next GSW at bat when Kranick singled.
Matt Hubbard closed things out with two innings of scoreless relief.
The Hurricanes returned to GSW to host Albany State on March 7. The results of this match-up were not available at press time.
The ‘Canes return to action on March 11 to kick off a three-game PBC series against Francis Marion University. Saturday’s games are scheduled for 1:00 and 4:00 p.m. Game three of the series will kick off at 1:00 p.m. on March 12.