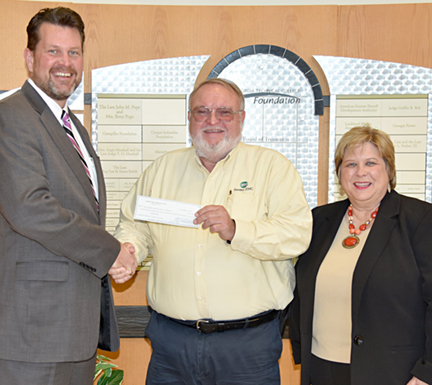 AMERICUS — The Sumter Electric Membership Corporation Foundation Inc. awarded a grant in the amount of $5,000 to the South Georgia Technical College (SGTC) Foundation recently. Sumter Electric Membership Corporation Foundation Chairman Greg Crowder presented the check to SGTC President John Watford, Ed.D., and SGTC Foundation Executive Director Su Ann Bird.
Proceeds from the Sumter EMC Foundation grant will be used to purchase equipment for the new electric power generation program as well as the commercial truck driving and industrial systems technology programs.
“One of the seven guiding principles that govern the way Sumter EMC operates is involvement with education and training in the communities we serve,” Crowder said. “We proudly support these programs at South Georgia Tech and the opportunities they will bring for the people in our community.”
SGTC President Watford thanked Crowder and the Sumter EMC Foundation for their support of the SGTC Foundation, the college, its students and its programs of study.
“Sumter Electric Membership Corporation and its Foundation have been tremendous partners for our college and foundation. We appreciate their commitment to our college and the community,” said Watford.
The Sumter EMC Foundation was founded in 2003, and is funded exclusively by cooperative members participating in Sumter EMC’s Operation Round Up.  Every month Sumter EMC “rounds up” the electric bill of participating members to the next whole dollar amount and deposits the difference into an interest bearing account.
The proceeds of the account are administered by the Sumter EMC Foundation’s board of trustees through grants to local schools, civic and charitable organizations. One hundred percent of the money collected is given back to the community through these grants. To date the Sumter EMC Foundation has awarded over $856,000 to community organizations in Sumter EMC’s service territory.
Sumter EMC is a locally owned and operated electric cooperative serving Chattahoochee, Dougherty, Lee, Marion, Quitman, Randolph, Schley, Stewart, Sumter, Terrell and Webster counties.