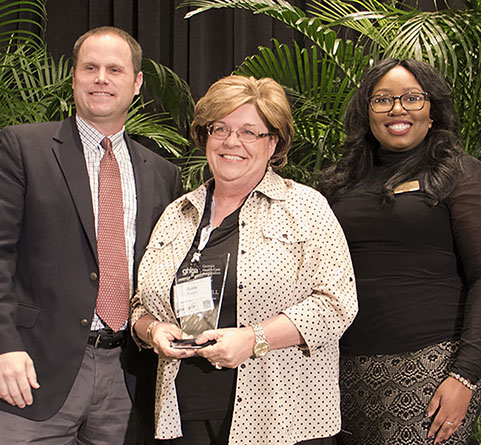 AMERICUS — Magnolia Manor Nursing Center Administrator Susie Fussell recently received a prestigious award from the Georgia Healthcare Association. Fussell was awarded the Emergency Preparedness Champion of Long Term Care Award. Nominees were evaluated on the following criteria.
— Involvement with local officials (emergency management agency [EMA], public health, regional coordinating hospital (RCH), etc.)
— Involvement with statewide emergency preparedness initiatives (state-sponsored regional exercises, long-term-care emergency preparations plan, FEMA courses, etc.)
— Implements preparedness efforts in facility
— Participates in state or GHCA sponsored emergency preparedness education
— Experienced in managing a disruptive event in their facility.
“Susie’s dedication to emergency preparedness is evident in the many hours of work and preparation she put in to facilitate the safe evacuation of numerous long term care centers across the state during Hurricane Matthew,” said GHCA/GCAL President & CEO Tony Marshall. “Her willingness to go above and beyond to ensure the safety of the elderly residents of Georgia and their caregivers makes her truly deserving of the 2016 Emergency Preparedness Champion Award.”
The first annual 2016 Emergency Preparedness Champion of Long Term Care Award was presented at the GHCA/GCAL Winter Convention during the Stars in Long Term Care Ceremony on Jan. 18. The GHCA Emergency Preparedness Committee created the awards to recognize those who go above and beyond to ensure the safety of the residents and caregivers and lead their center’s in preparedness efforts in the event of an emergency. The award was presented by GHCA Emergency Preparedness Committee Chair Stephen Bush and GHCA Emergency Preparedness Coordinator Alexandra Benoit.
“Susie has demonstrated great leadership capacity with the statewide efforts of Emergency Preparedness, said Hill Fort, senior vice president for Operations at Magnolia Manor. “She brings real world experience when it comes to disaster response and preparedness. With her experience Susie has led us to greater awareness and execution of emergency responses. Along the way she has dedicated herself and her time to assist other organizations in their efforts.”
Magnolia Manor is a faith-based ministry serving senior adults throughout South Georgia. Our services are open to all persons, regardless of denominational affiliation.