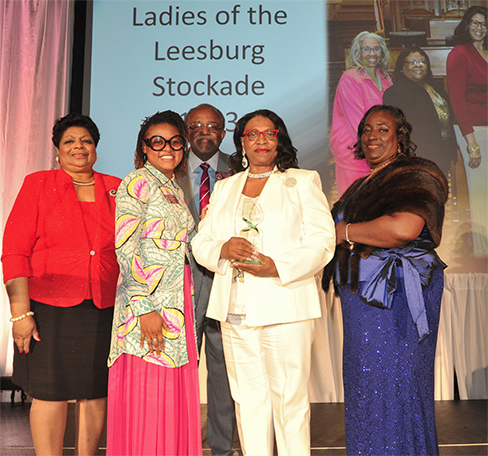 ATLANTA — The Georgia Legislative Black Caucus (GLBC) hosted its Annual Heritage Dinner March 15 at the Georgia Freight Depot. This year’s theme was, “A Call to Action: Celebrating Georgia’s Women focusing on their heritage and history.”
Shirley Green Reese, Ph.D., of Americus was one of three women honored that evening. Reese, a member of the Americus City Council, and president of the Boys & Girls Club of Americus-Sumter County, was both honored and excited to receive the Leesburg Stockade Girls’ Fortitude Award. Reese expressed her sincere thanks to State Rep. Park Cannon for her support and gratitude for remembering and recognizing the Leesburg Stockade story and the women who fought for equal and rights and justice. The group of young girls, between the ages of 12 and 15, from Americus were incarcerated in the Leesburg Stockade for two months during the summer of 1963, having been arrested in Americus for standing outside on the sidewalk near the Martin Theater. The girls lived in filth and degradation, and their families had no idea what had happened to them. Reese was one of those girls.
Reese said the “Leesburg Stockade girls,” now women, never want to forget the Student Nonviolent Coordinating Committee (SNCC) officers who played key roles in helping to free them after more than 60 days — U.S. Rep. John Lewis, the late Julian Bond, the late James Foreman, and “a man who helped save our lives with his camera and pictures, Danny Lyon.”
Each year marks another historical achievement for African Americans and this year the GLBC is focused its attention on the contributions of Georgia’s dynamic and multifaceted women. African American women have shaped the history of this great nation, fulfilling a wide variety of roles and making significant impacts on people in social and professional networks, while impacting the advancement of the general welfare of America.
The GLBC Heritage Dinner is one of the most successful and well-attended cultural events around the Georgia State Capitol during the legislative session. The Heritage dinner celebrates the rich African American history through paintings, music, dance, and recognize pioneers in our community who diligently serve to improve and enhance our country. In addition, proceeds raised help to support our Legislative Internship and High School Scholarship programs. The GLBC is the largest and most progressive Black Caucus in the United States.