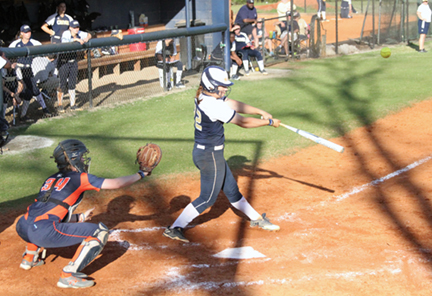 MICHAEL MURRAY I ATR: GSW’s Haley Tierce connects on a swing during an early-season contest in Americus. Tierce hit a grand slam on March 18 and belted a pair of homeruns between two games during the Lady ‘Canes’ March 19 doubleheader against Georgia College in Americus.

AMERICUS – The Georgia Southwestern State University (GSW) Lady Hurricanes returned to Peach Belt Conference (PBC) Competition on March 18, hosting the Augusta University (AU) Lady Jaguars at Lady ‘Canes Field in Americus.
The Lady Hurricanes earned their first two PBC wins of the season in the double-header, besting the Lady Jaguars 12-3 and 6-5 thanks, in part, to huge performances at the plate from GSW’s Haley Tierce, Allee Denney, and Joshlyn Martin.
The Lady ‘Canes returned to action the following afternoon to face the Georgia College Lady Bobcats. The GSW squad dropped a pair of tough decisions in the Sunday doubleheader, despite Tierce belting a pair of homeruns between the two games.
Following the weekend’s action, the Lady Hurricanes’ overall record slides to 14-16, while the team’s PBC record jumps to 2-6 on the 2017 season.
In game one of the Lady Hurricanes’ series against Augusta, Martin led the Lady ‘Canes to victory by driving in five runs and finishing three-for-three at the plate.
GSW took an early lead when Martin homered on a 2-2 count in the first inning, scoring Tierce. AU scored three runs in the fourth inning off a double and a two-run home run. Augusta hit another two-run homer in the fifth to pull ahead 5-2.
The Lady ‘Canes had a huge inning in the bottom of the fifth, scoring four runs. Emily Smith scored off a single from Tierce and Martin belted a three-run homer to score Mikela Barlow and Tierce to take a one-run lead.
GSW’s defense held off Augusta for two innings to take their first conference win.
Shannon Gibson (W, 4-5) pitched five innings and faced 23 batters, striking out one. Gibson gave up nine hits and five runs.
Brittany Childs pitched two innings and faced seven batters, striking out one. Childs only allowed one hit to record her second save of the season.
Augusta University scored one run in both the first and second frames to take an early two-run lead in game two of the afternoon. Tierce drove in runs on a grand slam late in the bottom of the second to score Brittany Davis, Ella Hawkins, and Barlow.
Augusta University scored their last run in the third and the Lady ‘Canes brought in eight more runs.
Denney blasted a three-run homer in the fourth to score Barlow and Tierce before GSW added five more runs in the fifth. Hawkins, Barlow and Tierce all scored off walks and B. Davis hit a two-run double to left center to score Martin and Denney to run-rule the game and take their second conference win.
Barlow went two-for-two at the plate and B. Davis was two-for-three.
Childs (7-5) pitched five innings, faced 22 batters, and struck out two. Childs scattered six hits and three runs.
The following day, The Lady ‘Canes captured the lead in the first inning against Georgia College when Tierce drove in two runs with a homer and scored Hawkins.
Georgia College cut GSW’s lead in half in the fourth and drove in seven more runs in the sixth including a three-run triple to lead 8-2.
The Lady ‘Canes loaded the bases in the sixth and scored five runs. B. Davis scored when Smith reached on a fielder’s choice. Graysen Sanders scored when Barlow was hit by a pitch. Smith then completed her round trip when Tierce was walked, followed by Hawkins, who scored when Martin was plunked. Barlow completed the rally, coming in off a single from Denney.
GSW’s efforts to come back from a six-run hole in the sixth inning came up just short and the home team fell by one run.
Georgia College collected 12 hits while GSW recorded seven.
Martin and B. Davis were both two-for-three at the plate. Tierce was walked on her next three at-bats after she homered in the first.
Gibson pitched 6.2 innings, faced 29 batters, and struck out one. Gibson walked three batters, gave up seven hits, and only allowed one run.
Childs pitched one-third of an inning, facing eight batters. Childs allowed six hits, seven runs, and walked one batter.
Georgia College opened the afternoon’s nightcap with a three-run homer in the first inning to take an early lead that they would guard through the rest of the contest. The Lady Bobcats eventually won the decision 9-3.
Tierce nailed a two-run homer in the second frame, but the Lady Bobcats added additional dingers in the fourth, fifth, and sixth innings to put the game out of reach.
Smith put GSW’s final run on the board in the bottom of the fifth.
The Lady Hurricanes will return to action on March 22, traveling to Franklin Springs to take on Emmanuel College.

Lady Jets take down Motlow 67-53, punch ticket to round two of national tournament