This Honda was t-boned by a Mustang Tuesday morning on U.S. Highway 19 South at the intersection with McLittle Bridge Road.

AMERICUS — Two drivers were injured in an early-morning Tuesday traffic crash on U.S. Highway 19 South at its intersection with McLittle Bridge Road.
According to Trooper Josh Willingham of Georgia State Patrol Post 10, Americus, a Ford Mustang driven by Lewis Lamb of Leesburg was driving north on 19 shortly after 8 a.m. when he entered the turning lane to turn right onto McLittle Bridge. Meanwhile, a Honda, driven by Daron Tyson of Americus, had stopped at the stop sign at McLittle Bridge and 19, and was proceeding across the northbound lanes when his vehicle was t-boned by Lamb’s Mustang. 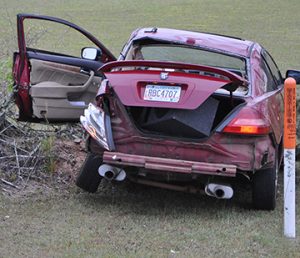 A better view of the damage sustained by the Honda.

The impact caused the Honda to spin and its passenger door popped open and the driver was ejected, ending up in the turning median on 19, the trooper said. The Honda came to rest on the roadside off the east shoulder of 19, facing north. Tyson was transported to Phoebe Putney Memorial Hospital in Albany. The trooper said Tyson was not wearing a seat belt. 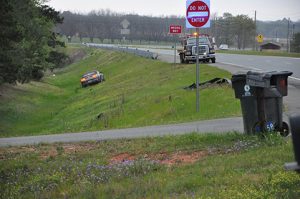 The Mustang ended up on the oppostite side of U.S. Highway 19 South.

After impact, the Mustang traveled across four lanes, northbound and southbound, and came to rest in a ditch on the west side of 19, facing north. That driver, Lamb, was taken by ambulance to Phoebe Sumter Medical Center for treatment.
The trooper said the accident is still under investigation.